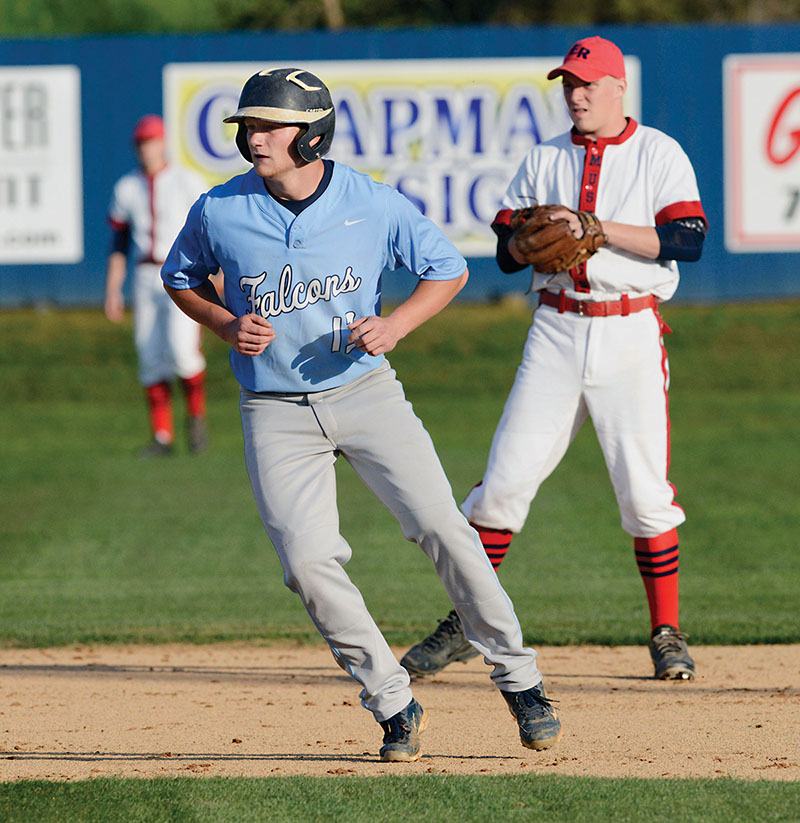 File photo by Wayne Hinshaw / for the Salisbury Post West Rowan’s Harrison Baucom (13) early in the season in a game at East Rowan. Baucom will play baseball at Catawba College in 2016.

MOUNT ULLA — Harrison Baucom and Catawba got together late in the recruiting process, but that doesn’t mean Baucom won’t be a significant addition for the Indians’ baseball program.
Baucom was recruited by other Division II programs — football and baseball — but he’ll head to Catawba where his sister Allison will be a senior on the soccer team.
“I love the school and I love the program, and it’s great to get an opportunity to play there,” Baucom said. “Catawba has a lot of good players coming back, but I look forward to competing with them.
“Coach (Jim) Gantt expects your best 100 percent of the time, and I’ll give him that. I’m excited about the next four years.”
Gantt, who is coaching Baucom in American Legion baseball this summer, explained Catawba didn’t have any scholarship money remaining for outfielders when Baucom made his decision. He said Baucom will become a scholarship player as a sophomore.

“He’s got plenty of athletic ability, and he’s going to help us a lot,” Gantt said. “We’re happy he’s coming. We’re excited he’s coming.”
While he’s not big, Baucom has two skills baseball players need. He has exceptional speed, and he has an exceptional throwing arm. He has the speed to play center field and the arm strength to play right field.
“We always talk about guys needing one tool to have a chance to make it as a college player,” West Rowan coach Seth Graham said. “Harrison has two.”
Baucom hasn’t pitched much at West Rowan or in American Legion, but his arm is good enough that he could end up as relief pitcher for Catawba down the road.
Baucom was the starting quarterback for West Rowan as a junior. He moved to tailback as a senior (1,113 rushing yards) while also handling punting and kicking duties. His 127 points as an all-purpose senior looked like a stat sheet from the 1950s — 14 touchdowns, 37 PATs and two field goals. He also caught 15 passes.
Baucom played most of his senior season with a groin injury that required several treatments a week.
“I tried to make a move in the Salisbury game (in Week 3) and hurt it, and it was a battle after that,” Baucom said.
Baucom competed for the West Rowan swim team in the winter months before putting together a healthy senior baseball season for the South Piedmont Conference champs.
He batted .343, but it was his .510 on-base percentage that told the story of how good he was as a leadoff man. He walked 20 times while striking out just 10. He scored 22 runs.
“We didn’t have guys with dominant offensive stats, but we still had success,” Graham said. “Baucom was a big part of the season we had. He was a tough customer. He played every inning of every game, and he was always that leadoff guy. We usually went as he went.”
Baucom is the right fielder for Rowan County American Legion and enjoys all aspects of Legion baseball at Newman Park.
“Legion ball is more than baseball,” Baucom said. “It’s a chance to play for veterans who love the game.”
Baucom considered going to UNC Pembroke as a punter, but now he’s ready to see what he can do as a year-round baseball player. Now he’ll be working on baseball in the fall months instead of taking a beating from linebackers.
“There’s no question at his size (5-foot-10, 170 pounds) that his future is baseball,” Graham said. “He’s made the right decision.”