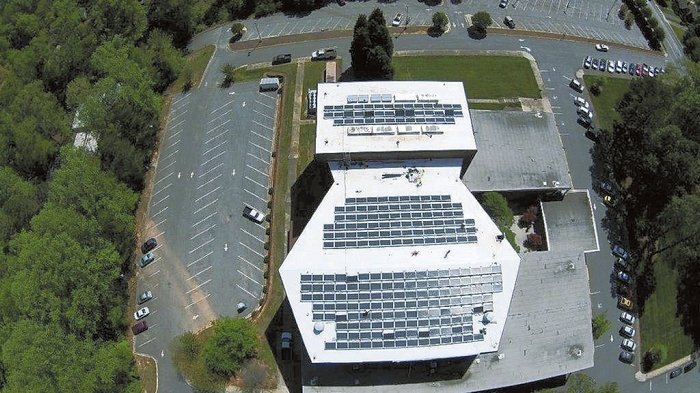 Submitted photo An aerial view shows the new solar panels on top of Robertson College-Community Center on the campus of Catawba College.

Catawba College has completed Phase I of its solar installation, which will ultimately provide nearly one megawatt of solar electricity for the campus.

The eight new solar electric systems will produce more solar electricity than that produced by all the other colleges and universities in North Carolina.

Catawba President Brien Lewis notes that the installation is a major undertaking with significant outcomes.  “It is a giant step forward for our efforts on sustainability in general and to the energy reductions reflected in the American College and University Presidents Climate Commitment (ACUPCC) that Catawba signed in 2007,” he said.

The installation, which includes solar electric systems, solar water heating systems, campus-wide water fixture replacements and extra insulation in the roofs, is projected to save the college nearly $5 million over the next 20 years and more than $11 million over 30 years. It will also reduce annual carbon emissions by nearly 1,050 metric tons. That is the equivalent of taking 193 vehicles off the road each year.

“This a shining example of the great things that can be accomplished when our trustees, administration and others in our college community come together to both reduce our energy consumption and lower our carbon footprint,” says John Wear, executive director of the Center for the Environment at Catawba.

It is uncommon for systems to be mounted on existing rooftops and parking lots, as Catawba’s is, says Mike Nicklaus, president of Innovative Design, the project’s consultant and facilitator. More often, the projects are installed on large field areas. “Catawba’s project is significant because it doesn’t take up additional land resources,” he says.