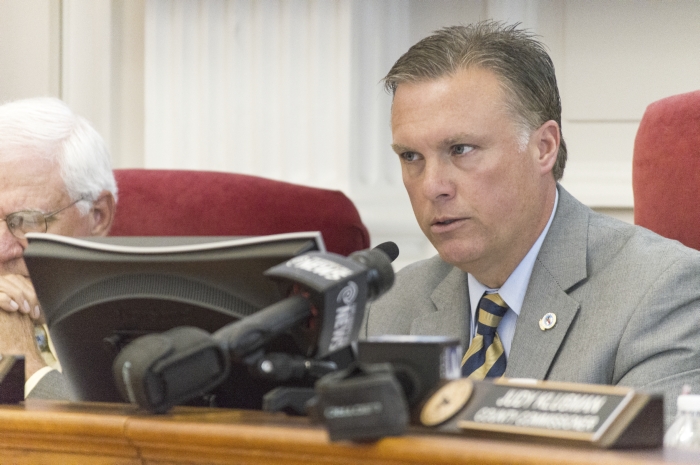 Greg Edds is chairman of the Rowan County Board of Commissioners.

In his longest public speech since being elected chairman of the Rowan County Board of Commissioners, Greg Edds on Monday presented a myriad of legal reasons in support of his vote to appeal a federal judge’s decision.

Edds’ speech, which exceeded 30 minutes, was the first given by any commissioner, and set the tone for what would be a unanimous vote to appeal a decision by Federal Judge James Beaty. In May, Beaty, a judge for North Carolina’s Middle District, declared Rowan’s practice of prayer from 2007 to 2013 of only offering sectarian prayer unconstitutional.

Half jokingly, Edds warned the standing-room-only crowd about the length of his speech. Edds took two deep breaths and dove in. The first sentence to leave his lips was the the U.S. Constitution’s First Amendment.

“Congress shall make no law respecting an establishment of religion, or prohibiting the free exercise thereof; or abridging the freedom of speech, or of the press; or the right of the people peaceably to assemble, and to petition the Government for a redress of grievances,” Edds said.

“Since the district court judge’s ruling last month, I’ve spent countless hours in personal study and reflection, trying to understand the legal aspects of this case; the constitutional framework surrounding this issue; my personal, spiritual response as a follower of Christ and the responsibilities I have as a local government leader and member of a civil society.”

Edds said he had spoken with multiple attorneys, pastors, friends, political acquaintances, judges and a Supreme Court justice. His study was an effort to make an informed decision about how Rowan should proceed in the case, he said.

Edds started with the 1983 U.S. Supreme Court case, Marsh vs. Chambers. It held that government funding of chaplains was constitutional because of the “unique history of the United States.”

Forsyth County’s recent prayer lawsuit also played a large part in Edds’ reasoning. In 2010, Beaty — the judge in both the Rowan and Forsyth prayer cases — ruled against Forsyth County. Forsyth appealed to the U.S. Fourth Circuit, which also ruled against the prayer practices. Forsyth appealed to the U.S. Supreme Court, which declined to hear the case in 2012.

Edds then cited a Greece, N.Y. case that was also mentioned in Beaty’s decision as a reason for sectarian prayer in government meetings being unconstitutional. In the case, the U.S. Supreme Court determined that volunteer chaplains were allowed to open meetings with a prayer.

“Even after refusing to hear Forsyth County’s case just a year earlier, the Supreme Court agreed to take up the Greece, N.Y., case in 2013,” Edds said. “Interestingly, the Obama administration’s Justice Department filed an amicus brief supporting Greece, New York’s practice, arguing that the government does not have the authority to regulate the content of prayer.”

The U.S. Supreme Court ruled in favor of Greece in late 2014. With its practices, the town didn’t violate the constitution by opening its meetings with prayer, and didn’t coerce participation by non-adherents.

“ ‘Prayer that is solemn and respectful in tone, and that invites lawmakers to reflect upon shared ideals and common ends before they embark on the fractious business of governing, serves a legitimate function,’ ” Edds said, quoting Kennedy.

Edds paused at the end of the quote, and looked up at the audience, holding his gaze for a few seconds.

“The Carroll County injunction had barred the commissioners from invoking the name of any specific deity associated with any one specific faith or belief in prayers given at board meetings, just like ours,” Edds said. “Meanwhile, back in North Carolina, confronted with the August 2014 Supreme Court decision in the Greece, N.Y., case, the district court judge was forced to lift his 2010 injunction against Forsyth County. However, unlike the district court judge in the Carroll County, Md.,  case the judge, the same judge, refused to lift the injunction he had placed on Rowan County.”

Instead, Edds said Beaty “doubled-down” by placing a permanent injunction against Rowan County. It bars Rowan commissioners from referring to any specific deity.

He listed potential options for Rowan County. Still, Edds hadn’t officially announced how he would vote.

Although he wasn’t a commissioner when the case was filed, Edds said he supported commissioners in their efforts to defend prayer practices. He listed multiple reasons why he supported the previous commissioners and supports an appeal — specifically, rights guaranteed to American citizens.

“I am provided those rights guaranteed to all of us by the First Amendment, including our right to be able to speak freely,” he said. “To me, this has always been an issue of free speech. Are we, as Americans, free to speak as our conscious dictates or not?”

Edds said some don’t believe free speech of public officials is the same as for private citizens.

“I get that, and I respect that thought,” Edds said.

He said the biggest question for Rowan County is whether it matters who provides prayer, pastors or commissioners. It’s a question he’s pondered and one that hasn’t fully been addressed, Edds said.

“The court had the perfect opportunity to say, ‘We find no threat to the establishment clause posed by solemnizing prayers offered up at the beginning of public meetings even if they’re sectarian in nature, as long as they’re conducted by a chaplain or member of the local clergy,” Edds said. “Instead, their decision addressed only the issue of sectarian prayer and their affect on the establishment clause and the issue of coercion.”

Edds said the second biggest issue was that Carroll County’s case was identical to Rowan’s. In the Maryland case, the injunction was lifted. Rowan’s remains in place.

His third issue came in the Fourth Circuit’s decision against Forsyth County Commissioners, where the court said clergy must be disallowed from praying their own conscience because  commissioners were arranging prayers.

“The Supreme Court has clearly struck that down,” Edds said.

He said that comments, particularly on the Salisbury Post website, portray commissioners as “backwards, knuckle-dragging, redneck, fundamentalist hayseeds who seek to ram religion down other peoples’ throats.” Edds smirked briefly. He said the characterizations divert the main point of arguments for prayer — free speech.

“So why do we pray in Rowan County?” Edds asked rhetorically.

“Even those who disagree as to the religious doctrine may find some common ground in the desire to show respect for the divine in all aspects,” he said. “Our tradition assumes that adult citizens, firm in their own beliefs, can tolerate and perhaps appreciate a ceremonial prayer delivered by a person of a different faith.”

In the end, Edds said developing respect and tolerance for one another would prevent the content of prayer from making a difference.

Josh Bergeron is a reporter covering Rowan County government, politics and the environment for the Salisbury Post.