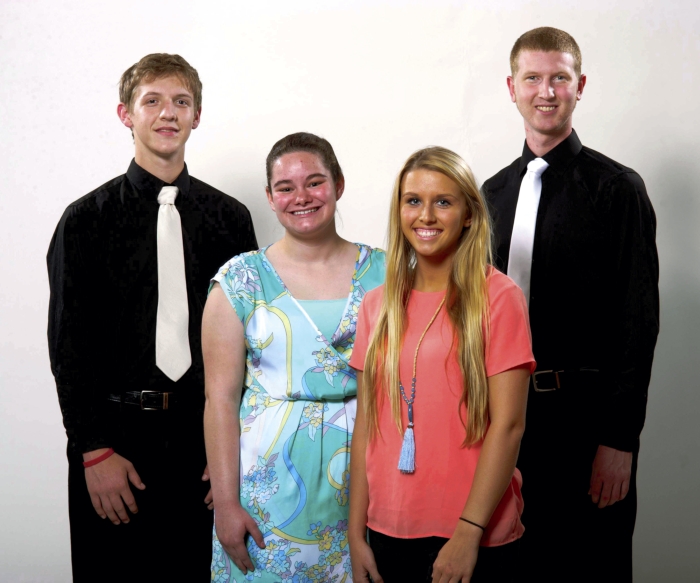 • Raegan Victoria Foster of Cleveland, daughter of Brandy and Scott Foster
Top five clubs and sports: Relay for Life, National Honor Society, JCL, Competitive Cheerleading at Elevation Cheer Company and varsity cheerleading
Other activities or honors: HOSA, Junior Civitan and youth group
Advice for freshmen: Work hard, set goals, keep an open-mind and stay true to yourself.
Favorite high school memory: Cheering on Friday nights during football season.
Proudest high school moment: Getting accepted into my dream school.
If I had $10 million, I would: Pay for my college tuition, buy shoes and give money to different charities.
• Matthew Patrick Langford of Salisbury, son of Glenn and Patty Langford
Clubs and sports: Marching band, jazz band, Junior Classical League, National Honor Society, Youth Commission International
Other activities or honors: U.S. Army All-American Marching Band, All-District Honor Band, Carolina Band Festival Honor Band
Advice for freshmen: Take your education seriously. It pays off.
Favorite high school memory: My favorite high school memory is traveling to San Antonio, Texas and spending a week in marching band heaven with the All-American Marching Band.
Proudest high school moment: My proudest high school moment was marching with the U.S. Army All-American Marching Band. Saluting thousands of soldiers at the end of our halftime show was unforgettable.
If I had $10 million, I would: Pay for my college education, as well as my brother’s, and put some money in an account for my children’s. I would put away enough to travel when I’m older, and some for the general betterment of my family’s life. The remaining sum of money would be divided between donations to charities, my church, and the establishment of a scholarship fund, which would gain interest to be used for a scholarship award.
• Savannah Nicole Morgan of Mount Ulla, granddaughter of Don and Sally Morgan
Clubs and sports: Marching band, Junior Classical League, Junior Civitans, swimming, National Honor Society
Other activities or honors: Concert Band, Church Youth Group, and long walks to the refrigerator
Advice to freshmen: Set a goal for yourself, and strive to achieve it. Don’t compare yourself to others—your best is enough.
Favorite high school memory: Traveling to Disney World with concert band
Proudest high school memory: Having the privilege of being the flute section leader for marching band for two consecutive years.
If I had $10 million, I would: Travel the world and do mission work.

Advice for freshmen: Take the SAT early. Care about your grades. Find where you fit in. There’s so much to say in so few words. All in all, make the best of your high school career. That being said, it’s never too late to join band.

Favorite high school memory: Late night hang outs with friends around the streets of Chapel Hill and in our hotel room at the 2014 JCL Convention.

If I had $10 million, I would: I would tithe $1 million, pay for my college education and that of my siblings, put away money to travel different parts of the world, donate to several causes I support, buy a marimba, and save or invest the rest.