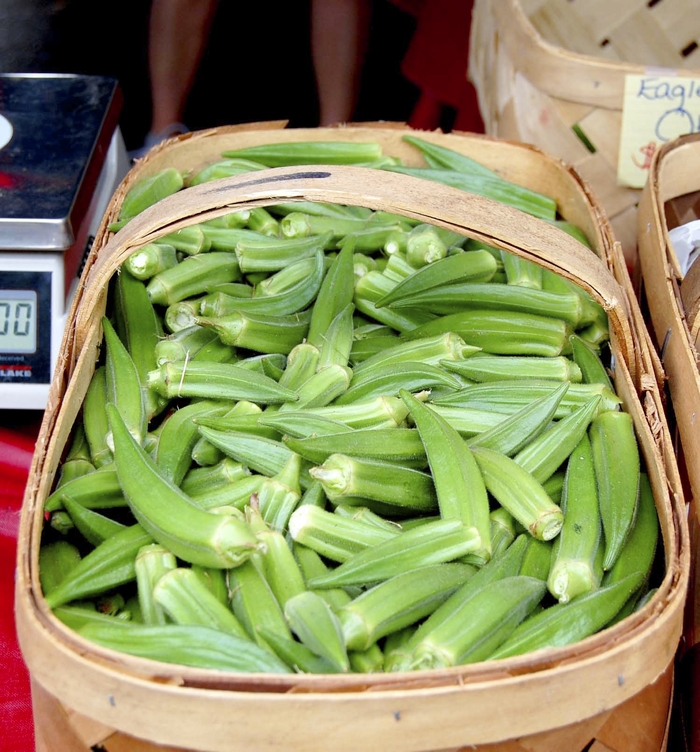 Deirdre Parker Smith/Salisbury Post The folks at Eagle Farms are already picking okra, despite the fact summer hasn't even started.

June just started, but do you know what came first? Okra. That’s right, Eagle Farm was picking okra in May. Sue Eagle herself was amazed, said she’d never seen okra that early.

That tells you a bit about our hot spring. Summer is yet to come, and it shows itself on Father’s Day, June 21.

Does this mean corn should show up soon? Or will it be peaches and blackberries?

Farmers are still waiting for measurable rain, which could change a lot of things.

What to do with early okra? Same thing you do with late summer okra — throw it in gumbo, stew with tomatoes, fry it up in a pan. Sue Eagle says it’s just as slimy as the later version, and some people like it that way.

Here’s a cooking method you probably haven’t tried — roasting. Preheat your oven to 425 degrees. Take about 18 fresh okra pods, slice them about one-third inch thick, place them on a roasting pan lined with foil and sprinkle with olive oil, about a tablespoon, then with salt and pepper to taste. Roast for 10-15 minutes. These okra will be slightly less slimy than when stewing, and it avoids the extra fat of frying.

On the May 26 food page, Dr. Chris Magryta wrote that keeping your gut healthy can keep you healthy. He also listed some basic rules for a healthy life. In case you missed them online, here they are.

• Try to deliver your baby vaginally when possible.

• Exclusively breastfeed your infant for one year.

• Eat lots of vegetables and fruits from 6 months on. Expect your children to do this and do not accept the parenting style that says that they are just kids and that kid food is OK. It is not if you understand the cutting edge science.

• Avoid a diet that has lots of flour and sugar as they promote the bad players in the gut microbiome.

• Expose your child to mother nature and dirt with normal world bacteria early on. Avoid pathogens like bathroom bugs and hospital bugs.

• Avoid chemicals and drugs where possible, as many have been implicated in altering the function of the gut. Non steroidal anti-inflammatory drugs as well as antacids are known to affect the gut cell muscles known as tight junctions.

• Increase the consumption of prebiotic foods that feed the good bacteria. Eat onions, leeks, cabbage, garlic and many other great foods for health.

Now we want it fresh and fast

U.S. sales in the fast-casual food segment are expected to swell to $62 billion in 2019, up from $39 billion in 2014. Pushing that growth, are millennials hungry for higher quality foods at affordable price points, now at $9 to $13 per check. Behind them are teenagers, who prefer cheaper meals but are evolving into the next wave of fast-casual customers.

Meanwhile, McDonald’s, now called quick-service instead of fast food, is seeing a decline in sales, although it has far more restaurants worldwide than any fast casual concept. Experts believe the trend will continue, and some quick-service chains are experimenting with a fast-casual spinoff. The emphasis is also on more nutritious foods, such as salads and protein bars or protein-rich meals, without the fat.

No. 2 is Subway’s Spicy Italian sub, with its cured meats and cheese, weighing in with 2,980 mg. of sodium. Third is Hardee’s Monster Thickburger, with 2,820 mg. of sodium and 95 grams of fat. Fourth is Sonic’s large chili cheese tots, with 2,760 mg. of sodium (59 grams of fat). Fifth is the Smothered Beef Burrito fromTaco Bell, with 2,260 milligrams.

Could I have a gallon of water to go with that meal?

Wayne Hinshaw: A visit to the Georgia Aquarium