Column: Cam’s worth it 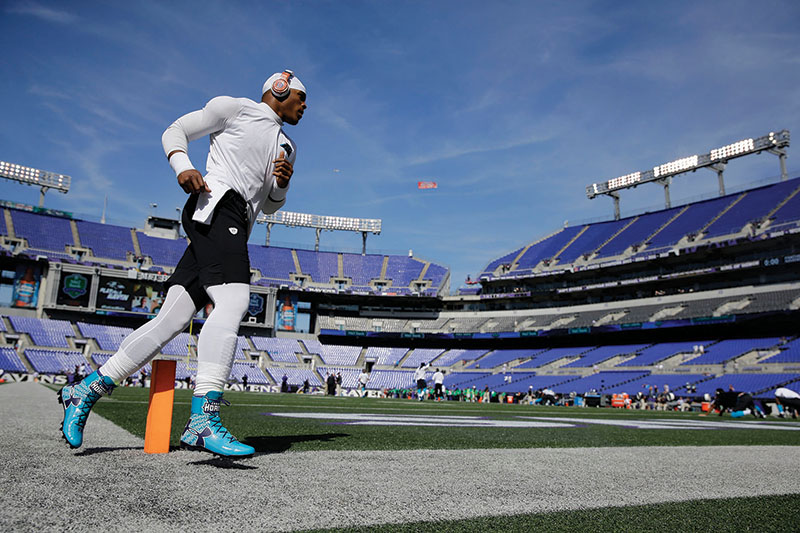 The Associated Press Carolina Panthers quarterback Cam Newton (1) warms up before a game against the Ravens in Baltimore in September 2014.

The Panthers did what any team with a franchise talent on their roster should do. They paid the player.

On Tuesday, Carolina and Cam Newton agreed to a five-year contract worth $103.8 million. He’s worth every penny.

“It just cements what I felt all along,” general manager Dave Gettleman said in a press conference. “…If you think of all the things he went through last season, it cemented the way I felt. He’s gifted and a worker and we felt he can take us to the promised land. That’s why this deal got done.”

Head coach Ron Rivera talked of a special bond with Newton. The two started their careers together in Carolina; Rivera as a new head coach, Newton as a rookie quarterback.

“He’s being paid for what he is,” Rivera said.

Rivera said as long as he is coach, Newton will be his guy because the newly-minted franchise player can take the team where it wants to go.

Newton has never rushed for less than 500 yards in a season. He has never missed more than one game at a time due to injury. The latter is incredible given Newton has taken more than twice the number of hits — well over 500 — of any other quarterback in the league over the first four years of his career.

Part of that is the team using him in designed runs, part of that is his physical style of play and penchant for scrambling when the play breaks down, and the last part is playing behind mostly a subpar offensive line since his rookie year.

Newton said he will be more conscientious about how he plays the game and the positions he puts his body in during the course of a game. Overall, though, nothing about him as a player or as a person will be different.

“I can’t state this enough that this doesn’t change anything as far as the preparation, the goals, the dreams, the the aspirations, the work ethic, anything,” Newton said. “Me, if anything, it accelerates it and puts more drive toward it.”

His main focus, in his words, is “bringing a Lombardi Trophy to Carolina.”

It’s easy to see in his post-game press conferences the outcome of the game affects his mood regardless of how he played. In losses, he often looked sullen and disappointed. In wins, he was much more cheerful.

Carolina certainly wouldn’t be back-to-back division champs without Newton. Even though the NFC South last year was the worst division in the league, he quarterbacked Carolina to three of its four wins down the stretch to claim the title.

In the last week of the regular season in Atlanta, Newton was 10-of-16 passing with a touchdown to tight end Ed Dickson and averaged 8.5 yards per carry with a rushing touchdown in the title-clinching victory.

The following week against Arizona in the NFC Wild Card round, he hit Fozzy Whittaker with a short pass that turned into a 39-yard, game-winning touchdown.

With Newton in his fourth year, the Panthers still weren’t close to a Super Bowl team. Without Newton, they would not have gotten the eight wins they did.