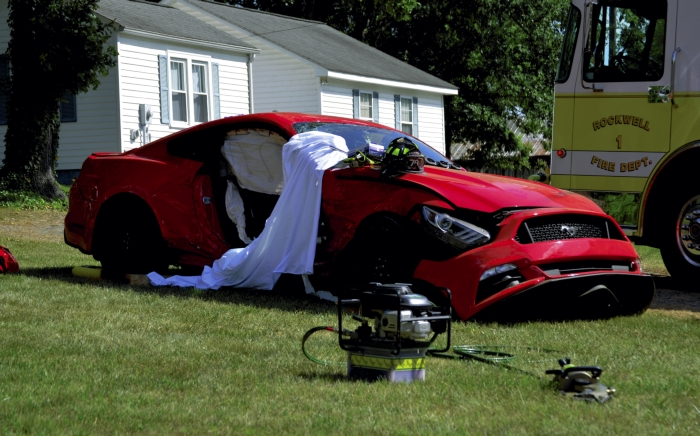 A Rockwell woman, who was a passenger in this 2015 Ford Mustang, was killed in a two-vehicle accident. The driver ran a stop sign at the intersection of Old Beatty Ford and Rockwell roads Friday and collided with Ford Explorer, not shown. Fire crews had to remove the door of the vehicle in order to get the woman out of it. Shavonne Walker/Salisbury Post

ROCKWELL — The N.C. Highway Patrol has identified Amber Denise Basinger, 21, of Rockwell, as the woman killed Friday following a two-vehicle crash at the intersection of Old Beatty Ford and Rockwell roads.

Trooper C.T. Walker charged Faisal Abdulrahman Al-Julaipi, 18, with misdemeanor death by vehicle and failure to stop at a stop sign, and he was placed under $50,000 bond late Friday. He was driving the 2015 Mustang in which Basinger was a passenger.

Al-Julaipi is from Kuwait. He is in the country on a visa and is attending the University of North Carolina at Charlotte

The wreck occurred about 3:45 p.m. Friday and was initially called in as a person pinned inside a vehicle, said Rockwell Rural Fire Capt. Chris Renfrow.

Renfrow said fire crews had to remove the door of the Mustang in order to free Basinger, who authorities said died at the scene.

Walker said Al-Julaipi was driving south on Rockwell Road and went through a stop sign at the intersection. The Mustang was hit by a Ford Explorer traveling east on Old Beatty Ford Road, and the impact was on Basinger’s passenger side.

Al-Julaipi and the driver of the Ford Explorer, 44-year-old John Clifford Goodman of Albemarle, were taken to Carolinas Medical Center-NorthEast with minor injuries.

Walker said it did not appear that alcohol or other impairing substances were the cause of the collision.

Mark Wineka contributed to this report.