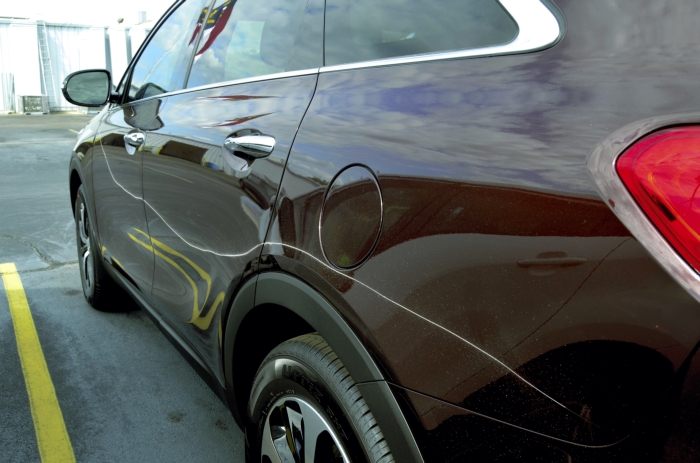 Drive into the main parking lot of Gerry Wood Kia and you’re greeted by car salesmen and women, willing to serve prospective buyers. Just beyond the building within a fenced in area sit a row of vehicles — 54 to be exact — all with deep scratches on them.

Salisbury Police are investigating the vandalism that is believed to have occurred sometime over the weekend at the dealership, located at 525 S. Jake Alexander Blvd. An employee discovered the offense on Monday.

All of the vehicles had deep scratches on the front, side and back panel of the new Kia vehicles, said General Manager Brad Wood.

“Whoever did it took the time to scratch every panel of the cars,” Wood said.

No other brand of vehicle was damaged and all of the Kias are new, he said.

Wood and police are trying to determine how the vandals gained access behind the fence, which also has barbed wire across the top. The gate access was also locked.

Wood said the vehicles will have to be repainted and reduced at a significant discount in order to be sold to a prospective customer. He estimates the damage at $150,000 and another $150,000 in losses.

Wood said the business has had break-ins in the past, but this is the first incident of vandalism of this caliber.

This is the worst incidence of vandalism Wood has heard of any dealership in his more than 20 years in the auto industry. He’s offering a $5,000 reward that leads to the arrest and conviction of the person or people involved.

Police Capt. Shelia Lingle said investigators are looking into the incident and hope anyone with information will come forward. No arrest has been made as of Tuesday.