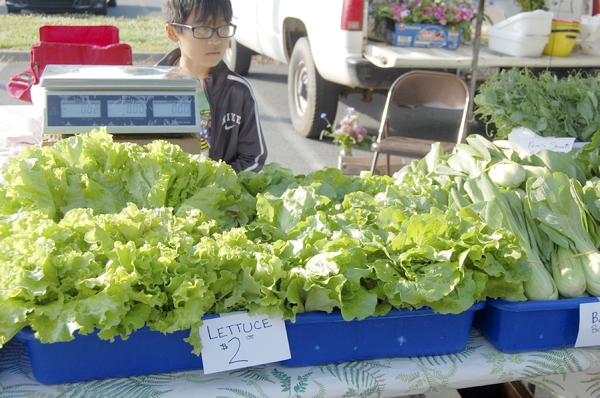 Deirdre Parker Smith/Salisbury Post A variety of fresh food, such as this lettuce and bok choy at Lee Ly's tent at the Salisbury Farmers Market, can help keep the balance of bacteria in your gut at the right levels. Without that bacteria, you can develop numerous health problems.

Your microbiome becomes you

Rules for a healthier life

I have been reading about human health and the gut for over 15 years now. A recent article in Scientific American on the gut microbiome pushed me to write this piece because the future of health is shifting at a rapid pace based on this research and most Americans are oblivious to this reality.

For the past few decades, medical education was all about disease management with drugs and hospitals. Now it is about your gut bacteria and your lifestyle. A new field of medicine called lifestyle medicine has developed based on the premise that many diseases are better managed through diet, exercise, stress management and toxin avoidance.

Why do we need a new field that should be part of every discipline in medicine? Because it is still considered the standard of care to use medicine first in most fields despite the growing lifestyle research.

The root cause of many diseases appears to arise from the GI tract and environmental influences on the gut. The advancing research indicates that our intestines are filled with 2-3 pounds of bacteria that are metabolically active and influence everything from nutrient metabolism and obesity to depression and neurobehavioral disorders like ADHD.

Think about that. The bacteria that live in your intestines will directly affect how you look, feel and act. That is simultaneously profound and scary. It is likely that as you read this you are visualizing bugs in your gut and then seeing them producing chemicals that travel through your blood stream to your brain. This is not far from the truth on a microscopic level.

Have to have the right stuff

It turns out that depending on the types of bacteria that live with you, the way you metabolize food will change.

Let us look at a mouse model of this topic. There is a research reviewed by Dr. John DiBaise regarding a mouse called the ob/ob mouse. These mice are genetically bred to have problems recognizing when they are full and thus overeat and become obese.

When researchers looked at the microbes of these mice, they noted that the mice had greater amounts of a bacteria called Firmicutes, whereas, their skinny brethren did not have the same bacterial volume or type of bacteria when fed the same diet.

In another study, they took the bacteria from an ob/ob mouse and transplanted it into the intestines of a germ-free, skinny mouse and induced obesity without changing their diet.
Stop here. A mouse that was doing well on a standard diet is given an obese mouse’s intestinal bacteria and then becomes obese. Cause and effect. No change to genes or diet and yet the mouse becomes overweight.

Can this effect occur in any other way?

Diet is a route to obesity through alterations in native gut bacteria. Bacteria consume the food that we eat, as well. If we eat plant based foods, certain healthy bacteria flourish.

However, high fat and high-refined starch diets promote the obesity inducing Firmicutes bacteria. These changes in bacteria can occur over days and have been noted in many studies linking bacteria and obesity.

Are we too clean?

Why is this all relevant to us today?

It appears that our shifting societal desires to be clean and avoid certain types of bacteria at early ages, our exposure to drugs/chemicals and our commitment to consuming an unhealthy standard American-style diet has altered our microbial communities in a way that has lead to inappropriate inflammation in our cells and a hyper-reactive immune system.

In other words, the lifestyle choices that we are making are altering the bacteria in our intestines and they then communicate with our bodies in a way that induces inflammation and an overactive self-injurious immune system.

These immune system and inflammatory irregularities are the major driving force of most chronic and debilitating disease in America today. If we understand this point, then we must follow the logic that we are what we eat. The diet drives the growth of abnormal bacterial colonies and in turn, drives our disease.

Let’s look at each problem individually.

Nutrition is a key piece in the destruction of the healthy gut microbiome. We have long known that the human diet is a major driver in disease onset and morbidity. What are the reasons? From a microbiome perspective it is simple — the food we eat feeds the bacteria in our intestines and they feed us. That is it.

Multiple studies have shown that human gut microbes in the developed world are vastly different from those of the rural world in Africa, the jungles of South America and the Aboriginals of Australia. They have much more bacterial diversity than we do which is a surrogate marker for good health. The cause of this difference is primarily diet. We eat a high fat, low fiber, sugar-laden diet that promotes certain bacteria that are pro inflammation. Rural diets that are loaded with fibrous foods like vegetables, fruits, roots and seeds that promote certain strains, including beneficial forms of Clostridial species.

These bacteria love to eat the fiber that our bodies cannot break down. This fiber is digested and the bacteria then produce short chain fatty acids, SFCA, through fermentation, like making beer. These SCFAs are then a major food source for our intestinal cells. Without adequate amounts of SCFAs, our intestinal cells will die and leave a leaky gut that is a harbinger of disease. The decrease in fiber consumption in some developed countries is down by 10 times historical amounts.

Bacterially derived SCFAs are now being studied as communication chemicals/signals to our immune system. They have been shown to increase T reg cell development, the police officers of the immune system. They keep the immune cells that fight the major wars so that they do not hurt us. Think of military police trying to keep the army in control during periods of no war when they are getting a little rowdy.

The story goes on and on for the effects of nutrition on gut bacteria and their effects on us, but you get the picture.

Drugs, especially antibiotics, are altering the microflora at an early age. When newborns or young children are exposed to antibiotics, studies show that beneficial bacterial groups are depleted.

This leaves the gut with a shifting microbiome and the new, more powerful residents that are not killed by the antibiotics take over at the expense of diversity and ultimately, health.

Dr. Kenya Honda of Keio University in Japan has proven this effect with a beneficial species of clostridial bacteria. He found that by treating mice with antibiotics, he could disrupt the immune system’s police cells known as T reg cells.

The subsequent result is altered immunity. He further went on to restore the immune system’s police cells by giving back these beneficial bacteria. Immune balance was then restored. This is classic cause and effect.

Dr. Cathryn Nagler at the University of Chicago followed this research by altering the mouse flora with antibiotics and then fed the animals peanut protein. The result was peanut allergy similar to the human disease. The cause was the antibiotic treatment disrupting the bacterial diversity and function.

Then the gut lining becomes permeable or “leaky,” causing the peanut protein to leak through the gut barrier and enter the circulation. This occurring in the absence of the T reg police leads to food allergy. Nagler was also able to prevent this allergic effect from occurring by adding back the good bacteria before the peanut challenge.

The end result of this beautiful science is that antibiotics, while necessary in some cases, are currently overused and a root cause of gut bacterial dysfunction.

Hygiene hypothesis, or the avoidance of microbes during early life, has left our immune systems unchallenged and has decreased the diversity of our gut microbiome. This theory was originally coined by Dr. David Strachan as the reason behind the increase in allergic disease in the developed world.

More recently, Dr. Graham Rock has expanded this hypothesis by calling it “the old friends” hypothesis. He thinks that the issue is not so much the decrease in exposure to common childhood illnesses, as much as the reduction in exposure to microbes that have evolved with us for millennia. This fits with research showing that children who live on farms are far more likely to be free of inflammatory illness than the inner city dwellers.

I was reading this research in the early 2000s and decided that it was a good idea for my son to be licked on his mouth by my dog and that playing in the dirt is advantageous. Lucky kid.

The American 20th century ushered in a feeling of the need to be clean. It was a surrogate marker of affluence. We ultra clean everything and we use strong chemicals to kill pathogens often selecting for the very strong bugs that can actually cause damage to us.

The old adage “what doesn’t kill only makes you stronger” was unacceptable to the point that we developed all sorts of drugs and chemicals to sterilize our world. You can follow the logic here that when our children were born they had limited to no exposure to “old friends” but plenty of exposure to chemicals. Not what the naïve immune system had expected.

Think about a modern scenario. A newborn is born to a mother that has a bacterial species colonizing her vagina called group B strep. She is treated appropriately with antibiotics to prevent neonatal bacterial disease (a real killer) but then unfortunately has to have a c-section because of birth complications.

The newborn now is delivered through a sterile operating area and misses the entire vaginal bacterial gauntlet. Add in the antibiotics coursing through his veins and we have a mess from an “old friends” perspective from the earliest moment of life.

Keep this story evolving as this child moves into a sterile home with hand sanitizer use everywhere and no animals to dirty the house. By three weeks of age, he develops milk protein intolerance and is switched to a special formula. By 6 months of age, his GI issues have mostly resolved so he is wrongly placed back on cow’s milk based formula only to suffer recurrent ear and sinus infections. Now comes the bombardment of repeated antibiotics.

And there you have it, the perfect pathway to auto immune diseases like diabetes or Crohn’s. If you have the wrong gene makeup, your risk goes through the roof.

This whole article boils down to the word symbiosis, a beneficial relationship between two organisms living close to each other. We need them and they need us. It is a beautiful thing. Now we have to remember how to keep them alive and happy in order to keep ourselves alive and happy. What a concept.

ROCKWELL — Dowd Dunn Sr. straightened up in his favorite chair and leaned closer when the movie was mentioned. “Men... read more