Doctor is pilot who examines other pilots 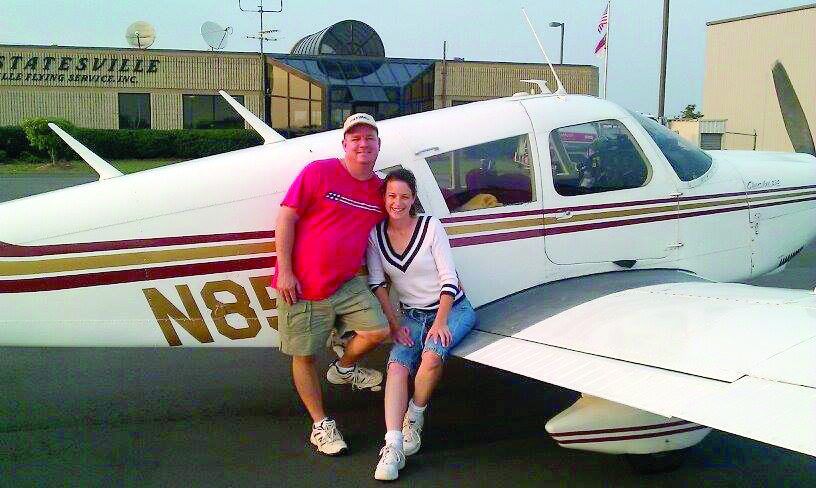 Dr. Sean Malone and his wife, Debi, with their plane at the Statesville Regional Airport. Malone is an aviation medical examiner for Rowan Diagnostic Clinic. He makes sure other pilots are fit to fly.

Salisbury doctor Sean Malone has a unique understanding of what airline pilots go through medically before they are allowed to fly their airplanes.

It’s a thorough examination procedure set forth by the Federal Aviation Administration, including medical and psychological exams. Because he is a pilot himself, Malone can see both sides of issues that often arise.

Malone is an internal medicine physician at Rowan Diagnostic Clinic, which has offices in Salisbury, Spencer and Cooleemee. He has added aviation medical exams for commercial and private pilots to the clinic’s specialties, as well as high altitude hypoxia simulation.

Aviation medicine is a natural for Malone. His dad was a pilot and he grew up loving planes and flying. He earned his pilot’s license after being in private practice for 10 years and is currently a commercial pilot who owns his own plane. He has been an FAA designated Aviation Medical Examiner for pilots for three years, certified in both Rowan and Davie counties.

He is the only certified aviation medical examiner in Rowan who is also a pilot, and this year earned senior status, which allows him to perform first-class medical exams which are usually held by Airline Transport Pilots. He is also a trained Representative on the FAASTem, the FAA Safety Team. He gives continuing education lectures across the state to pilot clubs and chapters of the Experimental Aircraft Association. “I try to demystify medicals for pilots so that they are willing to be honest with the AME,” he said. “I try to put a friendly face on the procedure.” At these lectures, pilots most frequently ask about medications and flying, since the FAA does not release an official drug list that restricts pilots.

Examiners are not required to be pilots but Malone thinks it helps. “If you are not a pilot, you really don’t know what pilots go through with medicals,” he said. “Being able to see both sides helps me be a better pilot and a better AME. There is a lot of mistrust between pilots and AMEs.”

An aviation medical examiner has to be the FAA’s eyes and ears,” Malone said. “You have to able to read people well …. How healthy is the person? What’s going on with the pilot? If things don’t mesh …”

For instance, if a pilot tells him he hasn’t seen a doctor in four years but is on seven medications. “That doesn’t make sense,” he said.

At the end of the exam, the examiner has three options: He can decline, which has significant implications, he said, as it makes it difficult for the pilot to ever get another medical. Secondly, the examiner can defer to the FAA.

“The problem is that the FAA is over 50,000 medicals behind,” Malone said. “If deferred, the minimum length of the delay is six months.” The third option is to issue, or to grant a special issuance after calling the FAA Central Medical Office in Oklahoma City, which means that the pilot can fly on a medical while the issue is resolved.

Malone also made a device to simulate high altitudes, based on a University of Colorado High Altitude Medicine system, and he does high altitude hypoxia simulation at Rowan Diagnostic Clinic. As far as he knows, his is the only testing system in North Carolina. He sees it as a very valuable tool for air safety. “If a pilot has asthma or COPD (Chronic Obstructive Pulmonary Disease), I can simulate what he will experience at high altitudes,” he said.

Most second- and third-class pilots don’t fly over 10,000 feet. At 10,000 feet, you have half the oxygen that you have at sea level. The FAA requires pilots flying over 12,500 feet to have oxygen. “Just sitting there, their brain is not working right,” he said. “At 15,000 feet you have to have oxygen for passengers.”

He has a theory of why people sometimes have outbursts on commercial planes flying at 25,000 feet or more. An airliner, even pressurized, never gets the oxygen level down to sea level, he said. At 42,000 feet, the cabin oxygen level is still 10,000 feet above sea level. “Undiagnosed hypoxia can throw a person,” he said. “A person can get confused, have panic attacks, memory lapses and act inebriated.”

The simulator can also be used in travel medicine, he said, testing travelers who plan to visit places of high altitudes. “I can simulate the altitude and make sure it is safe for the traveler,” he said.