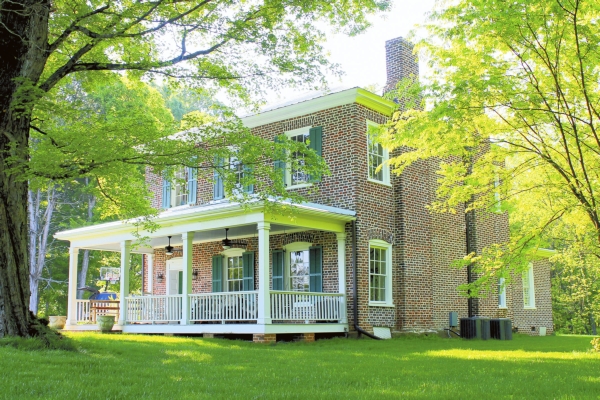 The Peter Kern House is one of Rowan County's historic structures.

OctoberTour is one of the oldest annual historic home tours in the South. Over the past 40 years the tour has featured more than 150 private historic homes and sites, showcasing the importance of their historic character and continued use for modern living.

On Oct. 4, 1975, Historic Salisbury Foundation (HSF) held the first annual OctoberTour and raised $5,000 to begin its Revolving Fund. This program has since enabled HSF to save more than 100 endangered properties and established HSF as a leader in the preservation movement.

This OctoberTour will feature a wide array of architectural styles, including several houses which have been saved using HSF’s Revolving Fund. Tour sites are included in the West Square, Ellis Street Graded School and North Main historic districts, as well as the recently rehabilitated Peter Kern House off Long Ferry Road. Tour sponsors, as well as those attending the opening Patron’s Party, can enjoy refreshments on the Patron’s Porch during both days of the tour.

• 1799-1801 Lombardy-John Steele House, 1010 N. Richard St. — Lombardy, a two-story with attic, side-hall plan frame house, was constructed for John Steele in 1799-1801. Steele (1765-1815) was one of the most prominent politicians from Rowan County and was elected to a number of local, state and federal offices, as well as an appointment by President George Washington as Comptroller of the Treasury in 1796. This plantation home was Steele’s principal residence until his death in 1815.

• 1820 Fulton-Mock-Blackmer House, 112 S. Fulton St. — This Federal style home has been recently restored after standing vacant for 30 years, following a fire on Dec. 1, 1984. The house was constructed in 1820 for local merchant John Fulton, for whom the street is named. The home underwent an Italianate style remodeling by Aquilla Jones Mock between 1863 and 1875. In 1931, actor Sidney Blackmer acquired the house and it was remodeled again, in the Colonial revival style. Stabilization of this important house began in 2012, using HSF’s Revolving Fund. The first level of this house was offered as a rehabilitation-in-progress on the 2013 OctoberTour.

• 1911 T. J. Anderson House, 500 W. Council St. — This one-story Queen Anne house was part of a larger piece of property purchased by Nancy C. Wyatt in 1875 that was later divided and sold in 1912 with a five-room cottage to Eugene McAlister by the Wyatt estate for $1,500. According to the city directories, it is likely that Thomas J. Anderson, a ticket agent for Southern Railway, and Nola Anderson were renting the property for many years until their purchase of the home in 1948. As one of HSF’s Revolving Fund properties, this home was restored to its original historical character in the 1990s and boasts 11-foot-high ceilings and original mantels, moldings, wainscoting, doors and hardware.

• 1820 Peter Kern House, 1360 Kern Carlton Road — This plantation home, built by Peter Kern circa 1820, recently underwent a three-year restoration. The two-story brick house with a side-hall plan (similar to the Lombardy-John Steele house), is covered by a hipped metal roof. It features an original curved stair inspired by Plate 31 from Owen Biddle’s The Young Carpenter’s Assistant (1805), as well as three original Federal style mantels and other museum quality interior detailing.

• 1929 Ramsey-Voss House, 927 N. Main St. — Built in 1929 by Robert W. Ramsey, a worker for Southern Railway, this brick cottage has only had three owners — Ramsey, his daughter and son-in-law, T. E. Voss, and the current owners. Typical of the English-influenced cottages built in the late 1920s and 1930s, the home occupies an elevated lot and is separated from North Main Street by an attractive stone retaining wall.

• 1919 Stokes-Snider House, 324 N. Fulton St. — Dr. Ernest Stokes, the resident surgeon at Salisbury’s first modern hospital known as the Whitehead-Stokes Sanatorium, built this Colonial Revival-Style frame house in 1919. The home was enjoyed by the Snider family for 59 years and features an Ionic-columned entrance porch, dentil cornice, and a pediment dormer. This home was located on the site of the Salisbury Male Academy (ca. 1815), later known as the Shober House.

• 1910 Tudor Revival Price Rental House, 313 N. Ellis St. — Attorney Augustus and Helen Price built this home, along with the three other distinctive early Tudor Revival-style houses that occupy the 300 block of North Ellis Street. Price inherited the land from his father Charles Price, a notable attorney who was the legal counselor for the Western North Carolina Railroad Company. These four homes are virtually identical with the exception of the alternating orientations of their floor plans.

• 1881 Addition added 1904 Ellis Street Graded School,  314 N. Ellis St. — On Oct., 23, 1880, the Carolina Watchman noted that the cornerstone was laid the previous Friday for Salisbury’s public educational facility and the town’s first school, public or private, to utilize an institutional design, in this case a cruciform brick building in the Italianate style. Originally five different grades were taught here. In 1904, Salisbury Public High School was attached to the southern side of the original structure. A T-shaped section was added to the south end of the high school in 1922 at the corner of West Liberty and North Ellis streets. This replaced an earlier wooden house which originally served as the superintendent’s residence and later as classrooms. The 1922 addition became a freestanding building when the rest of the high school was razed in 1967. This portion will be open to the public during OctoberTour.

• 1891 David A. Atwell House II, 404 W. Kerr St. —This Stick-style house was constructed for David Alexander Atwell, a wealthy hardware merchant, and his second wife, Sarah E. Bostian, upon their marriage around 1891. The home has Eastlake details, such as stickwork across the clipped gables, and a long wrap-around porch with turned posts, matchstick balusters, spindle frieze and molded brackets.

• 1893 Myers-Morris House,  1428 N. Main St. — Constructed for rural route postman, D.R. Myers and his wife, Mittie, this two-story framed house is offered as a rehabilitation-in-progress house. The Myers’ daughter, Floise, married Zeb Morris and they raised their five children in this home. It was later an antique store and then sat vacant for many years before being stabilized by HSF’s Revolving Fund in 2014.

• The 1820 Dr. Josephus W. Hall House and Kitchen at 226 S. Jackson St. will also be open during the tour. The Hall House grounds and adjacent portion of West Bank Street will feature food vendors and entertainment both days. Artifacts from John Fulton’s earlier home (ca. 1770-1820) are exhibited on the second floor, along with a desk used by Andrew Jackson when he studied law in the office of Spruce Macay in 1784.

For detailed tour information, sponsorship opportunities, photos of the sites and to purchase tickets, visit www.OctoberTour.com.