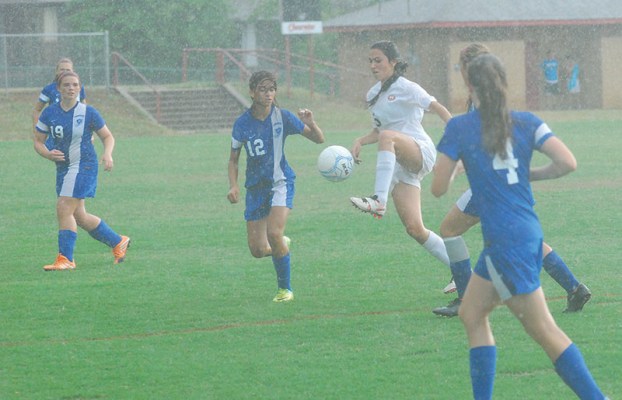 ADAM HOUSTON / SALISBURY POST Salisbury's Adna Music (5) tries to work the ball past Parkwood's Gracie Nunez (12) and a handful of defenders Tuesday in the third round of the 2A state girls soccer playoffs at Salisbury.

SALISBURY — The final chapter in Salisbury’s girls soccer season has been written — and it’s not exactly a happy ending.

“It’s more bittersweet,” senior forward Adna Music said Tuesday, just moments after the No. 10 Hornets were dispatched from the 2A state playoffs. “I’m glad I got to play one more game on this field. And despite the loss, we know collectively we worked really hard right up to the last minutes.”

Salisbury’s season-ending 1-0 loss to visiting No. 15 Monroe Parkwood came in the third round, a destination few could have foreseen when its 17-3-1 season launched in March.

“Just because we lost five starters (from last spring’s team), it didn’t mean you could count us out,” said defender Kathryn Rusher.

It took a well-placed shot by Parkwood freshman Samantha Lavoie with 23 minutes remaining to end the Hornets’ post-season march. Salisbury had won five straight matches, been unbeaten in its last eight and hadn’t lost at Ludwig Stadium all year.

“It was still an amazing season,” senior Mary Seifert said. “That’s what makes this so hard.”

This was an opportunity to advance further than any Salisbury team has. But like most opportunities, it came with an expiration date.

“We were in the exact same spot as last year,” said coach Matt Parrish. “Last year we beat a team that we arguably shouldn’t have to get here, then lost to a far superior Forbush team. This year it was Parkwood, and one bounce here and one breakdown there and we had a chance to win the match.”

Winning coach Nelson Garner called Salisbury “an outstanding team,” and quickly added: “They gave us all we could handle. We just found a way to get the result, and that’s what it’s all about this time of year. We didn’t have our best stuff. It was more of an 18-to-18 game, and neither team got any real good looks at the goal. It was sort of a chess match, waiting for an opportunity we could put away.”

That chance came midway through the second half when Lavoie pinballed out of a scrum some 35 yards from Salisbury keeper Juliana Anderson. Defender Nellie Brown took an angle on the advancing forward, but a burst of speed left Lavoie alone in space. She fired from 12 yards out and the ball skipped into the lower left corner.

“Samantha doesn’t have breakaway speed,” Garner said after Parkwood (14-8) — 7-7 a month ago — prevailed for the seventh time in its last eight decisions. “And it looked like (Brown) had her covered. But she found an extra gear.”

Seifert insisted the goal could have been prevented and Rusher, a junior defender, said there was a communication error on the play.

“You can play even the entire match and one breakdown can mean the difference between winning and losing,” Rusher said. “The way we feel right now is how Shelby felt on Friday. We got outshot and outplayed and put one in. This time it was Parkwood.”

Music was even more specific.

“One touch, one header can determine if we win the ball,” she said. “And the game.”

It marked the fifth time Salisbury has won 17 matches in a season. It has never won 18.

“We’ve never been past the third round,” Parrish reported. “Literally speaking, the girls maxed out at every point. You always want to win your last match but sometimes you just get beat. That’s the way it is.”