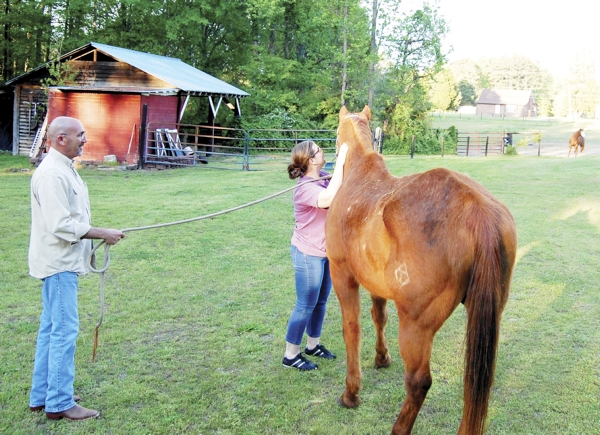 Tracy Inge gives Ceemee Streak a hug while her husband, Robert, looks on after they brought their horse back home. David Purtell / Salisbury Post

Robert and Tracy Inge will get to keep their horse, Cee Mee Streak, permanently, following the final ruling from a judge that dissolves a temporary restraining order and a preliminary injunction barring Highland Hill Stables owner, Lisa Young, from getting the horse back.

“Rob and I are very happy that this ordeal is over. Our main focus throughout has been the safety and well being of Cee Mee,” Tracy Inge said.

She said they hope by coming forward “others will follow and report any neglect or abuse of any animal when they see it.”

On April 29, Chief District Court Judge Charlie Brown signed a temporary restraining order that called for Young to give up possession of the horse and give immediate possession back to Robert, a Salisbury attorney, and his wife, Tracy.

The couple say they gave their horse, Cee Mee Streak, to Young nearly a year ago because the animal wasn’t being ridden very much at their home after their daughter went off to college. The Inges recently saw pictures of a thin Cee Mee Streak and demanded Young let them get him back.

Tracy Inge said the horse was healthy when they gave him to Young in June 2014. The couple say Young refused to return the horse or let them retrieve the animal. Highland Hill Stables provides therapeutic care, riding lessons and other activities for 70-something children a week.

Tracy and Robert Inge say they entered into an oral agreement with Young, but they still maintained ownership. When Young refused to return the horse, Robert Inge filed the court order restraining Young from possessing the horse.

The court found that according to Lisa Young, Tracy Inge gave her the horse. However, court records and testimony showed Robert Inge owns the horse and his wife was not at liberty to give the horse to anyone.

When Young received the horse in June 2014 he was blind in one eye, but otherwise healthy and fit. However, in late April, the horse was much thinner. Pictures provided to the Post by Tracy Inge showed the horse with its hip bones and ribs showing. The horse also had a saddle sore on its back.

The courts determined Young was aware of the horse’s thin frame and the saddle sore, but did not seek vet care until April 27. She did have the horse de-wormed in January because she believed his weight loss was the culprit.

In addition, Young continued to allow the horse to be ridden despite the ulcerated sore on its back. She changed the horse’s feed, but it was unclear if it helped him gain weight. She also said she took him out of the riding rotation at her stables, located on Old Mocksville Road.

Young said she tried everything she could to help Cee Mee, but admitted she failed by not contacting a vet earlier on in the process. Rowan County Animal Control cited Young with animal cruelty.

Judge Harper said she was convinced based on the evidence that Cee Mee’s condition before his removal from Highland Hill Stables was serious.

However, the judge said should the horse be returned to Young, he may suffer irreparable harm. She also allowed the preliminary injunction and officially said the Inges could keep Cee Mee Streak.

During the May 7 hearing, both Dr. Andrew Gardner, a vet who’d cared for Cee Mee in the past, testified as did the Young’s vet, Dr. Jay Moore. Both veterinarians said the horse could’ve died within 30 days without intervention.

The judge said Young’s attorney, Ed Ferguson, did not claim any losses suffered by Young if the horse were returned to the Inges. Judge Harper also said it was clear to her that Young was concerned about her business and her reputation being affected by the case.

Harper said the court excluded evidence from Inge about other horses at the stables because it had no bearing on the matter at hand.

Tracy Inge said Cee Mee has been improving every day, not just physically, but mentally.

“His old personality is coming back. He’s no longer lethargic. But we know it will take months before he will be healthy again,” she said.

Tracy said they’ve received support throughout this process and are thankful for the judges’ ruling.