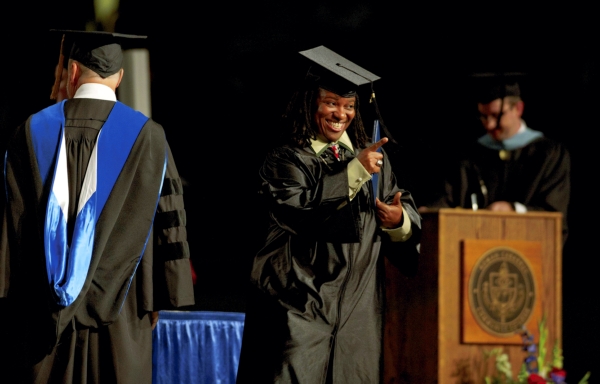 Friday was a very special day for Rowan-Cabarrus Community College’s 1,251 graduates as they received their well-deserved degrees and certificates.

Brandy Kegeris was one of those graduates who walked across the stage to receive not one, but two diplomas Friday afternoon.

Kegeris received both an Associate of Science and an Associate of Art degree from the college, and she’ll receive her high school diploma from Rowan County Early College later this month. She is the first in her family to receive a college degree.

The 17-year-old’s journey to this day hasn’t been easy.

Her family moved to Rockwell in 2005 during the aftermath of Hurricane Katrina. They weathered the storm out in their Gulfport, Mississippi home.

“We got really lucky,” Kegeris said.

Their home was spared, but her brothers got sick and after a week and a half of no power, the family decided to move to North Carolina to be near her dad’s family.

Kegeris started third grade that year, and is a product of the Rowan-Salisbury School System.

She said the Early College has challenged and stretched her over the past four years.

“You come in straight from middle school,” she said, adding that the program forces students to grow up and take school seriously.

Webster was humorous, understanding, down to earth and “connected with the Early College kids,” she added.

“The Early College trains you to look at college early,” she said, adding that she’s wanted to attend the University of North Carolina at Chapel Hill since she was a freshman in high school.

Not only was she accepted, but she was granted a Covenant Scholarship from the university. Kegeris plans to major in biology.

Because of her class credits from the Early College, Kegeris will enter UNC-Chapel Hill as a junior, and should be able to graduate in 2017.

But she doesn’t plan to leave in 2017 – Kegeris wants to become an anesthesiologist, so she plans to continue her education at the university’s medical school.

“I’ll be in school a while,” she laughed.

Kegeris isn’t the only one to find success at Rowan-Cabarrus. Timothy Wilson, a former student, told the graduates how his experiences at the college have helped him succeed.

“I’m originally a high school dropout,” Wilson said in an interview before his speech. After a few years, he decided to get his GED, and then he enrolled at Rowan-Cabarrus.

“I started to get involved,” he said. Last year, he received the college’s academic excellence award.

Wilson transferred to Eastern Carolina University, where he is working on a degree in hospitality management with a double emphasis on special events and food and beverage. He’ll be spending the summer completing a competitive internship with MGM resorts in Las Vegas, Nevada. He’ll spend his fall semester as an intern with Disney.

Wilson said his time at Rowan-Cabarrus allowed him to reestablish his self-esteem, confidence and direction in life.

“For me, Rowan-Cabarrus was not just a stepping stone. It really was a pivotal point in my life. I would not be here today were it not for this college and the faculty and staff,” he told the students during his speech.

Wilson was followed by Dr. Dari Caldwell, president of Novant Health Rowan Medical Center and member of Rowan-Cabarrus Community College’s Board of Trustees.

She encouraged the graduates to “do the right thing” no matter what, remember what they’re capable of and understand the impact they can have on others.

“The potential for greatness lives within each of you,” she said.