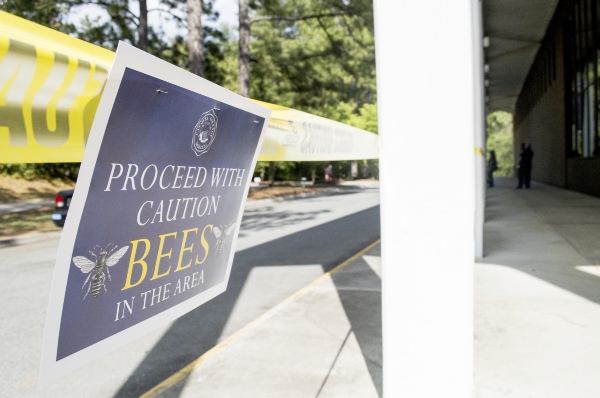 Caution tape and signs surround an area adjacent to Catawba College's Keppel Auditorium, where bees swarmed and caused the relocation of several events.

After Catawba College officials observed the buzz around Keppel Auditorium, they relocated Saturday’s commencement ceremony and split graduates into three groups because of a bee infestation.

“For the administration and for the college, we recognize that the auditorium was going to be filled to capacity and we did not want to take the chance,” Bitzer said. “With the number of bees, the public’s safety was really paramount.”

On Friday afternoon, the swarm of bees was smaller than other times during the week, said Catawba College Sophomore Joel Schlaudt. In total, Schlaudt said the bees swarmed four times in the area surrounding Keppel auditorium.

Swarms occur, Schlaudt said, when the amount of available space in a hive isn’t enough for its resident bees. The bees swarm in certain locations as they look for a suitable hive location, he said.

Because the bees couldn’t be removed from the area, Schlaudt and two other students helped set up bait boxes to capture the insects. They would be placed on a local beekeeper’s land after being captured.

The school on Friday blocked off access to the roadway between Oliver’s Way and the main entrance into Keppel Auditorium. A news release advised pedestrians to avoid the area because of the swarm.

All graduation-associated activities previously scheduled in the Robertson College-Community Center were also being relocated.

By Susan Shinn For the Salisbury Post Thursday dawned clear and pleasantly cool — a perfect morning to Wake Up... read more