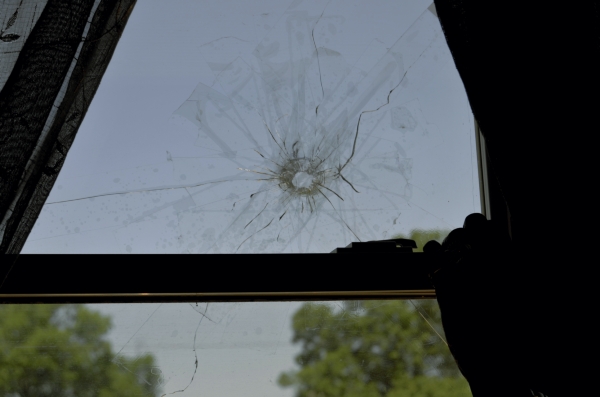 Shavonne Walker/Salisbury Post Olivia Kilgo shows the place where a stray bullet came through her living room window, following a drive-by shooting at her Morlan Park Apartment. Kilgo and other neighbors' apartments were sprayed with bullets on May 7, following what police believe was a possible domestic situation.

Olivia Kilgo moved into her Morlan Park Apartment five months ago with intentions to make it a temporary place on her way to finding a home to buy. After a May 7 shooting that sent the 65-year-old ducking for cover, she’s intent on moving.

Salisbury Police say just before 1 a.m. shots were fired into multiple apartments, which are situated on Pearl Street, near Morlan Park Road.

At least four apartments were sprayed with bullets sending all of the occupants to the floor.

There were no witnesses and no one was injured.

Lingle would only say it appears someone at the complex was a target. Some people are cooperating, while others are not, she said.

The incident was possibly domestic related, but no one has come forward with other details, Lingle said.

Police continue to investigate, but Kilgo still has plans to pack up and leave.

She was in her kitchen area doing laundry when she heard a pop and then the Lord spoke to her to move toward her bedroom.

As soon as she made her way to the bedroom, Kilgo heard several pops. She quickly moved to the floor. Her first reaction was that it may have been a transformer and then her thoughts went to gunfire.

While still on the floor, Kilgo called 911 saying she believed someone was shooting outside her apartment or either a transformer had blown. Scared, with her heart pounding, Kilgo turned off the lights.

Police responded and took statements from Kilgo and her neighbors. The next day her daughter was at Kilgo’s apartment and noticed a bullet hole in her bedroom curtain. When her daughter looked closer she saw a bullet lodged in a window seal. The bullet went through her front door and made a beeline for her bedroom.

Police collected the bullet, she said.

Another bullet flew through her living room window, ricocheted above her bathroom door.

A North Carolina native, Kilgo moved to New Jersey where she lived for over 45 years.

“I didn’t come from New Jersey to be shot at,” he said.

“I know it can happen anywhere, but this is too close for comfort,” she said.

Kilgo says she’s not the only one with plans to move. Others neighbors whose apartments still had bullet holes in them declined to comment.

Kilgo said she’s never experienced anything like this in her life. She’s a minister and said she thanks God for his protection for her and her neighbors.