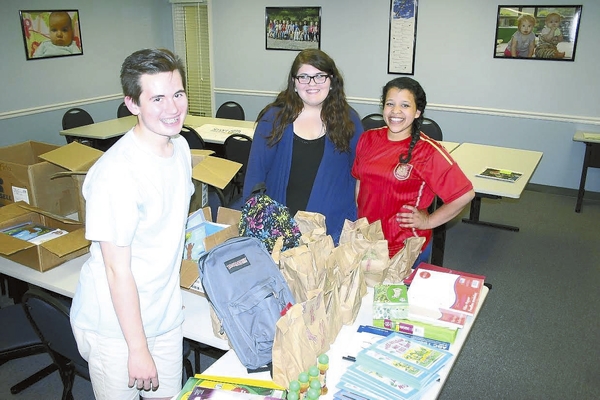 Thanks to local Junior Civitan clubs, Rowan County’s N.C. Pre-Kindergarten students will be ready for the next step when they graduate from Pre-K at the end of this school year.

With donations from the adult Civitan clubs, the Western District clubs raised $1,900 for the project, with some $1,180 coming from Rowan alone, according to Brandy Kegeris, district president and president of the Junior Civitans at Rowan County Early College.

The youths assembled 171 kits at their convention, and presented a check to Smart Start Rowan to fund the rest.

“We have 355 children at 19 sites,” says Millie Nelson, Smart Start’s N.C. Pre-K coordinator. “Every child will get a kit. The kids will love it and the teachers will love it.”

“We’re really proud of these students,” says Jane Jackman, a member of Summit Civitan, a Smart Start Rowan board member and a community guide with The Arc. “They are giving these kids a good start for kindergarten. We take crayons and play-doh for granted, but there are kids who don’t have it.”

“There are so many families in poverty in this county,” says Amy Brown, executive director of Smart Start Rowan. “This fills a great need.”

It was also a lot of fun for the Junior Civitan students.

“Last year, we participated in Stop Hunger Now, but I figured we should take on more local projects,” Kegeris says of her governor’s role. She met with Brown in the fall to determine what items needed to be collected. She and others also wrote letters to Civitan clubs to ask for donations.

“Everything you collected in your county went back to your county,” says Iris Bonilla, a senior at Early College and her club’s vice president.

Kegeris asked Bonilla and Janssen Keiger, a rising senior at Early College, to join the club.

“At our school, we have about one-third of our student population in the club,” Keiger says. “It’s been a very good club year.”

Junior Civitan clubs at East Rowan and Salisbury high schools also participated in the project. District-wide, there are 1,500 students in Junior Civitan.

Rowan County Early College served as host for the district convention, held May 2 on the campus of Rowan-Cabarrus Community College.

“It was a learning experience,” Bonilla says. “It was great to host the conference. We had a blast.”

Kegeris, who will attend UNC this fall, presented a video about the conference to the Civitan area meeting on May 5. Jackman couldn’t believe the quick turnaround.

“I was so just impressed with her leadership skills,” Jackman says. “Having a group of young folks come together and execute this idea was fabulous.”

The project was submitted for the Junior Civitan International District project of the year. The winner will be announced in late June.