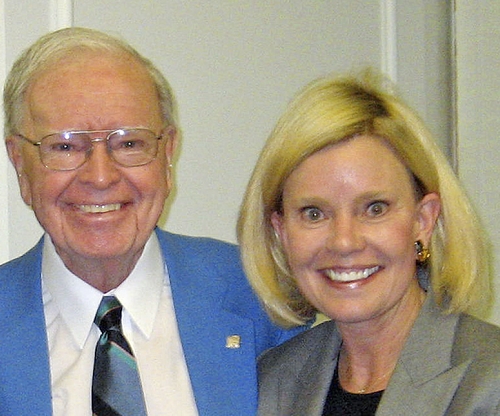 Even when racial segregation was common practice, Ralph W. Ketner never paid mind to a person’s race, sex, or any other classifying characteristic. As the co-founder of Food Town — now known as Food Lion — Ketner simply wanted the best employees. Period.

“My supermarket, if you back up, was probably the only business that ever treated the customer identically,” says Ketner. “There was no white, black, yellow, green. And hiring people was the same philosophy.”

A proponent of equality throughout his life, Ketner found himself personally connected to the issue of gay and lesbian equality after learning that his daughter, Linda, is a lesbian. After Linda shared her struggle of trying to change herself for 30 years before finally coming out, Ketner became a vocal advocate for LGBTQ — lesbian, gay, bisexual, transgender and questioning — equality. He is also a main monetary donor for the Salisbury Pride organization’s annual Pride Festival.

“Whether it’s racism, LGBT equality, poverty, homelessness, education or treating workers fairly, my Dad puts his mouth, his money and his heart into it,” says Linda Ketner.

With Salisbury Pride to hold its fifth annual Salisbury Pride Festival the weekend of June 20, organization president Tamara Sheffield and the local LGBTQ community have created the Ketner Ally Award to be presented at the festival, in Ralph Ketner’s honor.

“Mr. Ketner is a champion for all people,” says Sheffield. “In choosing a namesake award, we said, ‘What better person who has laid a legacy for this city than him?'”

The Ally Award recognizes the allies of the gay community who have helped to progress LGBTQ equality and acceptance, and will be presented to Ketner and four other recipients: Ashley Jo Farmer, the Cataldo family, Mike Clawson and Sue Whitley.

Award recipient Mike Clawson says that he is humbled and honored to receive the Ketner Ally Award, and that well-respected allies like Ketner can help to change hearts and minds for the better.

“This is a civil rights movement,” says Sheffield. “These are the people in solidarity with us. Without our straight allies, this doesn’t continue to move forward.”

Moving the cause forward and not accepting intolerance are main priorities for Sheffield, the LGBTQ community, and its allies like Ralph Ketner.

Last week Ketner sent an email to every member of the Salisbury City Council, encouraging them to support a proclamation for Salisbury Pride Festival. Former mayor Susan Kluttz issued a mayoral proclamation to recognize the first Pride Festival in 2010, but Mayor Paul Woodson has declined to issue a proclamation since he won the office in 2011, saying that it’s too controversial.

This year’s Salisbury Pride Festival will be more than a one-day event, and will open on Friday, June 19 with a headliner act featuring actor, producer, director and screenwriter Del Shores.

In response to a federal judge’s ruling for marriage equality in North Carolina in October of 2014, this year’s festival will feature a mini wedding expo, with a variety of wedding vendors displaying their goods and services, and showing their support for the gay community.

“Couples want to feel comfortable, and they want to give their money to people who support them,” says Sheffield.

Sheffield, Ralph Ketner and Linda Ketner are hopeful that Woodson will issue a proclamation for Pride Fest and — on a larger scale — that the U.S. Supreme Court will rule to strike down gay marriage bans nationwide in the coming weeks.

“I’m stunned at the progress nationally,” Linda Ketner says. “Stunned and deeply grateful — not only for myself, but for millions of others who have traveled this lonely journey.”