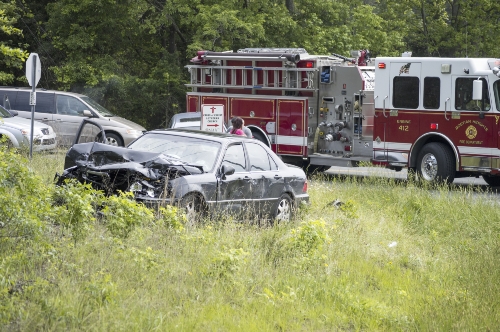 Josh Bergeron / Salisbury Post - A wrecked car sits at the intersection of Old Beatty Ford Road and Shuping Mill Road after being involved in a two-vehicle accident. Two people were transported to the hospital as a result of the wreck.

Two people were injured Tuesday when a Dodge Durango and grey Acura collided at the intersection of Shuping Mill and Old Beatty Ford roads.

The Acura, traveling west on Old Beatty Ford Road, struck the Dodge as it crossed the intersection. The Acura’s driver and passenger were transported to Carolinas Medical Center-NorthEast in Concord with with non-life-threatening injuries, according to State Trooper A.J. Carpenter.

Rockwell resident and driver of the Durango Kevin Murray, 25 was issued a citation for failing to yield for right of way as a result of the accident, Carpenter said. Murray, who was traveling north on Shuping Mill Road, refused treatment at the scene.

After striking the Durango, the Acura veered off of the road and received significant damage to its front end.

A third vehicle near the scene of the accident also veered off of the road, receiving damage to its front end, but Carpenter said the third vehicle wasn’t related to the auto accident.