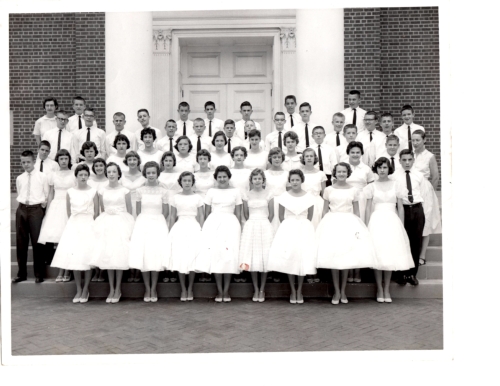 Michele Lobl of Valencia, Calif., provided this photograph of the last eighth-grade class to graduate from Frank B. John School, prior to the opening of Knox Junior High in 1959-60. Last week, Lobl and her sisters, Carol Ben-Moshe of New York and Sandy Bennett of Cooper City, Fla., were in Salisbury to visit some of their childhood haunts. Their maiden name was Hyman, and they were the daughters of the late Herman and Evelyn Hyman, who owned and operated the Smoke Shop at 218 1/2 S. Main St. Lobl, a 1963 graduate of Boyden High, was a member of that last eighth-grade class at Frank B. John School on North Ellis Street. The school, which closed as an elementary school in 1965 with the opening of Overton Elementary, became a home for school administrative offices, Those offices will be moving to the new Rowan-Salisbury Schools central office now under construction on North Main Street.