East Rowan golf team has shot to get that ring 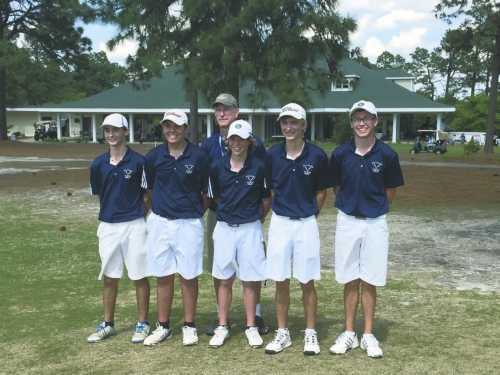 East Rowan is right where it wants to be going into the final day of the 3A boys golf state tournament at Longleaf Golf and Country Club in Southern Pines.

After the first round, the Mustangs are tied for first place with three-time defending 3A champion Gastonia Forestview.

The boys have a shot to get that ring.

“They gave themselves a chance tomorrow,” coach Rhett Teems said. “It’s that old golf cliché. You can’t win it on the first day, but you can shoot yourself out of it. We’re right in it.”

The Mustangs and Jaguars — tied at 11-over — are eight shots clear of third-place Waxhaw Marvin Ridge and 11 shots ahead of fourth-place Waxhaw Cuthbertson. Rockingham County sits in fifth position.

Leading the way for East Rowan was Nick Lyerly and Logan Shuping with a pair of even-par 71s. They, along with Concord’s Stephen Carroll, are in a six-way tie for second place in the individual title race. The group is one shot behind leader Michael Sardinia from Cuthbertson.

South Rowan’s Davis Richards declined to play in the state tournament after qualifying for a third straight year. Instead, he attempted to earn a spot in the PGA’s Wells Fargo Championship as a Monday qualifier. He shot 72 at Rocky River Golf Club in Concord, missing the tournament by six shots.

In Southern Pines, Jacob Durham came through for the Mustangs with a 5-over 76, and Bryson Sprinkle gutted out a 6-over 77 to get the Mustangs to 295.

Teems spent most of the morning on the course with Durham. Back-to-back bogeys on the eighth and ninth holes gave Durham a 39 on the front. He rolled off six consecutive pars before bogeying two of the last three holes.

“I saw Jacob get up and down so many times today I can’t remember,” Teems said. “He made clutch par putts all day. That was the difference in his game today. He was able to get up and down when he had to.”

The biggest par save of his day came on the 15th hole from a sand trap. Teems said Durham’s tee shot on the 171-yard par-three found the bunker. Durham’s second shot from the sand finished about 10 feet from the hole. His par putt from a downhill, sidehill lie found the bottom of the cup.

“They just beared down,” Teems said.

Lyerly bogeyed the fifth and sixth holes. A birdie on No. 7, coupled with a bogey on No. 9, put him at two-over after the front nine. He was able to birdie the 10th and 16th, a pair of par fours of decent length, to move himself back to even.

Shuping had an up-and-down day. A birdie on the par-five fifth hole, after a pair of bogeys, put him at 1-over. He made the turn at 1-under, following birdies on the eighth and ninth holes. His birdie-bogey-birdie on the last three holes of his round left him at even par.

After a successful day on the course, the team went to dinner. Teems stayed behind the look at scores online. He said he is going to be a nervous wreck Tuesday when the Mustangs take the course with a state title within their reach. Teems, however, doesn’t expect his players to show the same level of tension.

“The guys seem relaxed,” Teems said. “They are having a great time. If they come out and play golf and stay relaxed, I think they’ll be OK.”