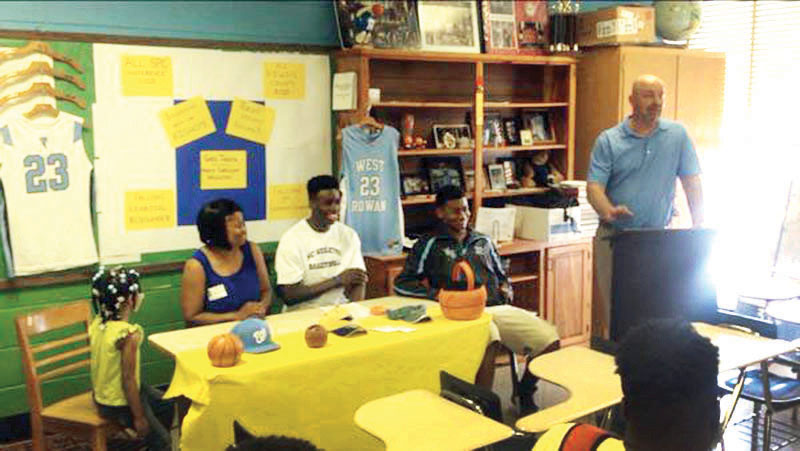 MOUNT ULLA — What sold West Rowan’s Greg Joseph on North Carolina Wesleyan was the proximity of the Rocky Mount college’s weight room to the basketball gym.

“I’m going to be spending a lot of time both places,” Joseph said. “I like that they’re right next to each other.”

Joseph is the ultimate work-ethic player. He’s a blue-collar warrior who transformed himself between his junior and senior seasons from contributor to go-to guy.

“I went through a tough physical grind before my senior season,” Joseph said. “I did it because I knew I needed to get better if I was going to play in college. I got bigger. My skills got better.”

The grind the 6-foot-2 Joseph accepted was old-fashioned, but effective.  Pushups, pullups and plenty of running. West Rowan assistants Willie Ellis and Clint Mauldin pushed him to improve.

“He worked as hard any player we’ve had,” West Rowan head coach Mike Gurley said. “Then he had a great senior year . He was our second-leading scorer and leading rebounder. He and (fellow senior) Celexus Long gave us a great 1-2 punch, and that gave our young guys time to grow.”

Joseph improved his offensive game dramatically. He was a layups-and-stickbacks guy as a junior. As a senior, he was undersized for the post, but he owned a deadly turnaround jumper that propelled him to spots on the All-South Piedmont Conference team and All-Rowan County team.

“I used to shoot it flat, but we worked a lot to get more arch on that shot,” Joseph said. “We changed the trajectory.”

The season highlight for West Rowan (13-12) was winning the Sam Moir Christmas Classic for the first time since 2005.  Joseph scored 38 points in the tournament and made a game-winning shot against South Rowan in a semifinal.

A week later, Joseph scored a career-high 20 points in a 72-70 win against Hickory Ridge.

N.C. Wesleyan coach John Thompson loved Joseph when he saw him on film. Joseph liked the players and the campus when he visited.

Monday’s ceremony for Joseph was low-key, Cokes and cakes in Gurley’s classroom, with his teammates seated at desks and his family in chairs. Still, this was one Gurley’s favorite moving-on-to-college-basketball celebrations.

“There’s a personal parallel between Greg’s career and my own at North Meck,” Gurley said. “I averaged 4 points as a junior, but then I had a good senior year and went to Belmont Abbey. We’ve had high-profile guys sign with big schools, but this one means as much to me as any of them.

“This kid has made himself into a player, and he’s done the job academically. This is a day that could change Greg’s life, and it’s a day not a lot of people thought was going to occur.”

Joseph is going to a program with a pretty good team. N.C. Wesleyan’s Battling Bishops were 13-12 last season. They play in the USA South Conference with other Division III schools such as Averett, Methodist and Greensboro College.

Joseph will move out to a wing position in college, but he’s confident he’ll be able to make the transition.

“Greg kept saying he would play college ball, and he made it happen,” Gurley said. “He’s going 200 miles away, but you don’t go to college to stay close to your high school friends. You go to college to become a man.”