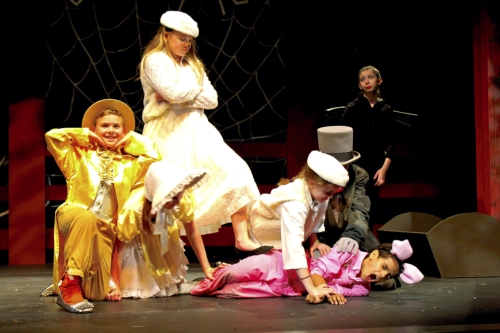 I can’t attest as to whether the cause was childhood nostalgia or the talented cast, but I can say with complete certainty that Piedmont Players’ production of Charlotte’s Web strikes a cord. In the audience, there’s a shared feeling of hominess as we remember the first time we turned the pages of E.B. White’s novel. It is the universality of the play that really helps it hit all its marks.

It follows the story we all remember. The runt of the litter, Wilbur, is saved by a tenderhearted young girl named Fern. In the care of Fern’s Uncle, Wilbur grows into a plucky young pig. On the farm he meets many animals, but none so special as the writing spider, Charlotte. Charlotte defies the common perception of spiders.  She is charming, motherly and loving. As Wilbur grows to full size, the threat of being turned into bacon presents itself. Thanks to some creative wordsmithing by Charlotte and a little help from the generally unpleasant rat, Templeton, Wilbur is saved from the smokehouse and manages to win a prize at the county fair.

Alongside this major plot thread is the anecdotal assistance of a colorful cast of animals and humans that help paint the picture of small-town life. The set manages to convey the magic of youth beautifully by capturing the larger-than-life way we all saw the world when we were young. A spider web was a spectacle to us, and Reid Leonard and Allen Jones have rediscovered that sentiment and delivered it to a gracious audience. The fly system was a delight, and managed to provide aerial movement elegant enough to match the elegant and matriarchal portrayal of the eponymous Charlotte by a young Brittany Schnell. The extremely minor technical mishaps were played off deftly by the cast and crew.

In fact, the cast did most everything with noteworthy skill. Ali Khatib has all the “aww-factor” and charm as the Wilbur you recall reading. Watching him ham it up was a highlight of the show (pardon the pun). Frances-Gray Riggs’ Fern was grounded and tenderhearted.  As Templeton, Hayden Palmer appropriately captures snark and sleaze without being at all unlikeable. The cast is rounded out with young actors that manage to play all the animals with character and talent. Creative costuming is a welcome addition to an already aesthetically pleasing piece of theater. The animal costumes were tasteful and simple, resisting the urge to err on the side of campiness.

From beginning to end, the show was engaging and enjoyable. The emotional moments are played without unnecessary gravity or sappy melodrama. The humor is light and universal. It is Charlotte’s Web precisely as it should be: like going back to that forgotten childhood place you never knew you missed.

Young is a senior at Carson High School.