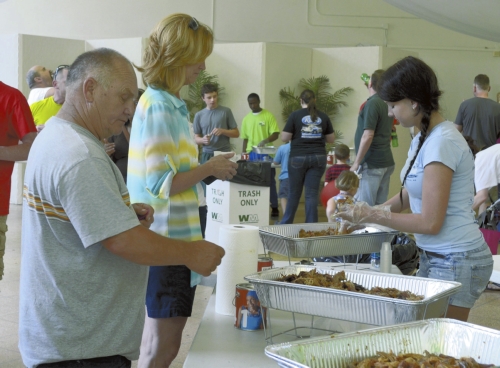 Hugh Fisher/For the Salisbury Post At last year’s festival, more than 350 people bought tickets to the People’s Choice barbecue judging, each receiving 10 samples of barbecue cooked by participants in the Jiggy with the Piggy Barbecue Challenge.

Jiggy with the Piggy barbecue festival returns to Kannapolis

KANNAPOLIS – The annual Jiggy with the Piggy Barbecue Challenge and festival comes back to Kannapolis on Saturday, with live entertainment and food Friday and Saturday.

A live concert by Darrell Harwood, an annual downtown street fair and fresh-cooked barbecue are expected to draw thousands to the grounds of the N.C. Research Campus.

The barbecue cook-off is sanctioned by the Kansas City Barbecue Society and will feature teams from all over the U.S., Deputy City Manager Eddie Smith said.

“The community has been super supportive, especially all the nonprofits that participate,” said Smith, himself formerly a member of a competition barbecue cook team. “None of it would be possible without their assistance and support.”

Last year, tickets to those two People’s Choice events sold out, Smith said – about 300 tickets in all.

The barbecue competition is expected to draw over 80 teams, Smith said, with about 95 percent of the teams that participated last year returning for this event.

“These teams have said, ‘We have other options in Virginia and Georgia, but we want to come to Kannapolis, North Carolina to compete,” Smith said.

Brenda Drye, of the Cabarrus Events Association, said that the 36th annual spring street fair will have more entertainment and activities for kids.

The downtown festival has previously been known as CottonStock and VillageFest.

Drye said this year’s selection of vendors is the largest in recent years, and features craftspeople, jewelry, refurbished furniture, and other art.

“Our biggest draw besides the barbecue is the entertainment,” Drye said. “Darrell Harwood is in concert Friday night from 7 to 10 p.m.”

Local dance studios will perform Saturday morning, followed by The Entertainers at noon, Mister Pleaze Band at 3 and The Fantastic Shakers from 7 to 10 p.m.

All of the concerts are free to the public and will be located on West Avenue in downtown Kannapolis.

The People’s Choice tastings will be held on the grounds of the N.C. Research Campus.

The chicken wing tasting will be held tonight starting at 7 p.m., with ticket sales starting at 6 p.m.

The barbecue tasting will be held Saturday starting at noon, with tickets on sale at 11 a.m.

No advance tickets will be sold. Both events are expected to sell out.

“I think new businesses and even new people in Kannapolis are looking for events like this to showcase their businesses, and to have things to do without going out of town,” Drye said.

In addition to the concerts and tastings, there will be a live showing of the Disney film “Cars” today at 8 p.m.

Also on Saturday, the Jiggy with the Piggy 5K Challenge run is expected to draw some 350 participants, Drye said.

“All of these things work together to improve the quality of life for everyone in Kannapolis and the surrounding areas,” Drye said. “Having events like this in our downtown will draw people to downtown, and that will introduce them to the new businesses that will be coming into our area.”

By Shavonne Walker shavonne.walker@salisburypost.com The day after Salisbury man was charged with breaking into a local computer store, authorities charged... read more