Nancy Honeytree: A Branch Off the Old Vine 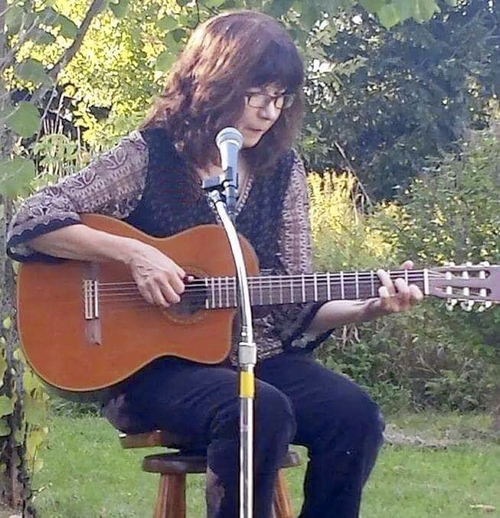 Nancy Honeytree will perform at The Inn on Saturday.

Christian Music Pioneer Performs in Salisbury at The Inn

Nancy Honeytree grew up in Iowa and Indiana in the 60s, loving and listening to folk/pop singers like Joni Mitchell, Carole King and Joan Baez. It was only natural, for she had been born into a rich musical family, her dad a classical music conductor and her mom a violinist and bluegrass fiddler. Early in her childhood, Nancy learned to play the cello and guitar, and it blossomed into learning popular songs, and eventually creating her own tunes.

Honeytree, who some call “The First Lady of Christian Music,” will be sharing some of those tunes when she appears this Saturday, May 9 at 8 p.m. at The Inn, 1012 Mooresville Road.

Her father, Bill Henigbaum, founded the Western Carolina University Civic Orchestra, and conducted it for several decades before recently retiring in his 90s. The WCUCO is sponsored by WCU’s School of Music and is funded and supported by the Jackson County Arts Council and the National Endowment for the Arts. Students and faculty from Western Carolina participate, as well as residents from four surrounding counties.

Her mother Mary studied at the American Conservatory of Music and played violin in the Chicago and Asheville Symphony Orchestras, and also won “Fiddler of the Festival” in the 1980s at the Union Grove Fiddlers’ Convention.

In high school, Nancy naturally gravitated toward the hippie crowd. “Honeytree,” which is the English translation of her family name Henigbaum, became her “hippie name.” Along with the hippie scene came exposure and experimentation with marijuana and other drugs. It was a new fascination, but the temporary high left a void in her life that kept her searching for more.

It was through a mutual friend at her sister’s art school that Nancy first heard about the love of Jesus Christ and was exposed to the “good news” of the gospel. When she learned that she could be forgiven by God and have a brand new life, she accepted this offer of salvation and it gave her a peace and joy that forever changed the direction of her life and music.

It was through a local music venue similar to The Inn, called the Adam’s Apple, that Nancy met several other musicians who, along with her, helped to pioneer the early Contemporary Christian Music (CCM) scene. Back then, it was simply called “Jesus Music.” One of these pioneers was guitarist Phil Keaggy (who recently performed in Salisbury at the Lee Street theatre). Phil was a frequent guest at the coffeehouse, and the two musicians soon struck up a friendship and eventually toured together.

In more recent years, Nancy has broadened her ministry to speaking and singing to single adults, as well as Spanish-speaking audiences. She has spoken at single adult conferences, and also traveled to 23 different countries, sharing the gospel through word and song. She was the first female artist signed to the contemporary Christian label Myrrh Records in 1973, which became Amy Grant’s label about five years later.

Nancy and her two sisters had the honor and privilege of performing with her father’s orchestra on the occasion of his 90th birthday. Nancy put down the cello and picked up her guitar to lead the audience in singing “Happy Birthday” to her dad.

Honeytree will be sharing her special blend of fingerstyle guitar and folk/pop tunes this Saturday at The Inn. This will be a free concert and is open to the public. An offering will be taken for Nancy, and her CDs and other materials will also be for sale after the show.

Sandy Hoffman grew up in Salisbury and received his first guitar as a Christmas present at age 10. He also learned cello and played with the Salisbury Symphony Orchestra. As a teen, he performed solo and was a member of several bands.

Since then, he has served as worship leader for several ministries, including YWAM International, writes a monthly magazine column, and speaks and performs at various music conferences and events. His current release, Sereno, is an instrumental acoustic guitar album.