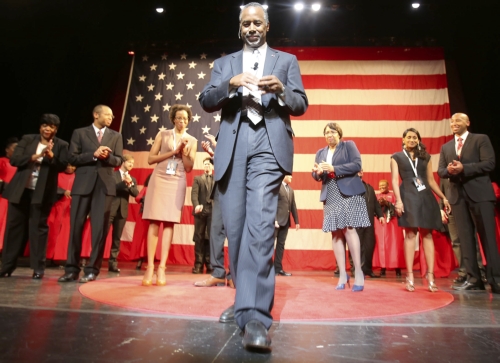 Ben Carson, a former pediatric neurosurgeon who announced his presidential candidacy Monday, owes his lively political career to a 2013 speech at the National Prayer Breakfast. With President Barack Obama just a few seats away, Carson excoriated the president and went through a list of ills, from political correctness to the national debt.

It turned out to be a harbinger of rhetoric to come. Later that year he told a conservative crowd at the Values Voter Summit in Washington: “Obamacare is, really, I think, the worst thing that’s happened in this nation since slavery.”

If all the presidency required was provocative oratory and a compelling biography — both, after all, feature prominently on the resume of the current occupant of the White House — then Carson would win the job hands down. Born into poverty in Detroit, where his single mother struggled to keep her two children physically and spiritually whole, Carson overcame — powerfully. After some rocky early years, he became an excellent student, was admitted to medical school and went on to direct pediatric neurosurgery at the Johns Hopkins Children’s Center for 29 years.

No presidential candidate can ever be fully prepared for the job. But there is a reason that political amateurs fall short time and again: Politics, like any other demanding profession, takes talent and practice. Newcomers are better off starting with a more modest primer than the presidency.

Carson’s challenge now is to show that he is something more than a dilettante riding a wave of conservative disdain for the president. Even he admits that he has homework to do.

He has acknowledged that politicians are obliged to be more “measured” in their speech than, say, neurosurgeons. “But at the same time,” he said, “I have to be careful not to become somebody else, which is what happens to so many people in the political sphere.”

Carson’s got that angle covered: He is unquestionably his own man. Now to express that independence, and his public-policy ideas, in a more — what’s the word? — “measured” tone.

Thank you, teachers, for your vital work As our nation celebrates National Teacher Appreciation Week (May 4–10), I want to say... read more