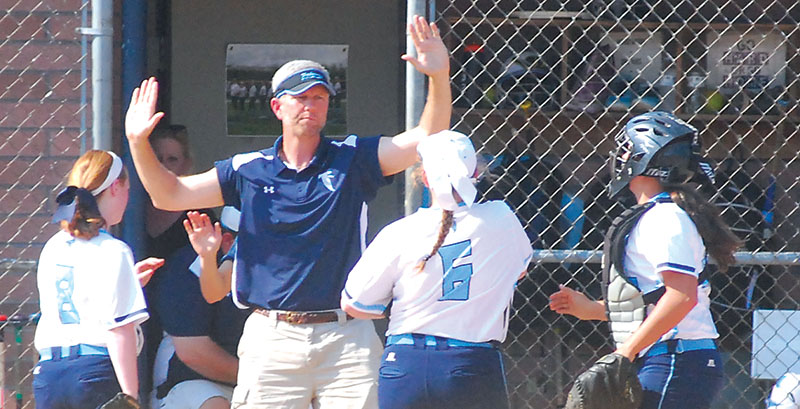 MOUNT ULLA — So many things went haywire for West Rowan in Tuesday’s South Piedmont Conference tournament opener, yet the Falcons found a way to survive and advance.

The top-seeded Falcons (17-4) held off county rival South Rowan 3-1 to advance to Wednesday’s semifinals at Central Cabarrus High against fifth-seed Hickory Ridge. In the process, West Rowan had to work around back-to-back errors, baserunning blunders, and leaving the bases loaded in the fourth.

In the end, West Rowan also had to halt South Rowan with two on and no outs in the seventh with the game on the line.

“When it is South Rowan, it is always close,” West coach Jimmy Greene said. “Yes, a ton went wrong, some of it our fault and some of it not. But we survived and that is the name of the game.”

One freak incident in the bottom of the sixth may not be as easy to overcome for the Falcons going forward. With Parker Greene at the plate, a foul line shot smacked off the hand of catcher Marissa Yow in the on deck circle and hit pitcher Peyton Green square in the left wrist as she stood in the dugout doorway. Both players finished the game with Yow appearing to be OK.

Greene, however, was in obvious pain with a wrapped wrist as she pitched the final two innings to improve her record to 15-4. She quickly departed the ball park after the game with her left arm in a wrapped splint. Her status for Wednesday’s semifinal game and the rest of the postseason is unknown.

“I just don’t know at this point” said coach Greene, also her father. “I will see how she feels tomorrow, but I am worried.”

The Falcons got to South Rowan starter Sammi Kennerly in the early frames starting with a long solo homer to center by shortstop Hunter Gibbons for a 1-0 lead.

“I was just trying to hit a line drive, and it just went out,” Gibbons noted. “But we just left too many runners on base today and our hitting wasn’t there.”

West Rowan added a pair of critical runs in the third as Taylor Martin walked and Gibbons blooped a double to right. Back-to-back infield singles by Parker Greene and Yow made it 3-0. After that Kennerly shut down the Falcons, leaving the bases loaded in the fourth then retiring the final six batters of the game, three by strikeouts.

“I thought I did pretty good, but it just didn’t happen for us tonight,” said Kennerly.

South missed a major opportunity in the top of the third when it loaded the bases on a pair of West errors. Greene struck out the next two batters to end the threat. The Raiders finally broke through in the top of the sixth with an Autumn McKeon single then a one-out double to the right field corner by Caitlin Waters.

The last Raider threat in the top of the seventh put two on with no outs, but Greene recorded her seventh strikeout and coaxed two infield flyballs to end it.

“That’s been our story all year,” South coach Hunter Fuller said of his team that ended the year 7-11. “We lost seven games by two runs or less, but we have enjoyed our season. We just lost too many close games.”

Regardless of the outcome of the SPC tournament Wednesday and Thursday, West Rowan will host a first-round playoff game next week to open the State 3A softball playoffs.