Fibrant’s new director: we’re evaluating every portion of the business 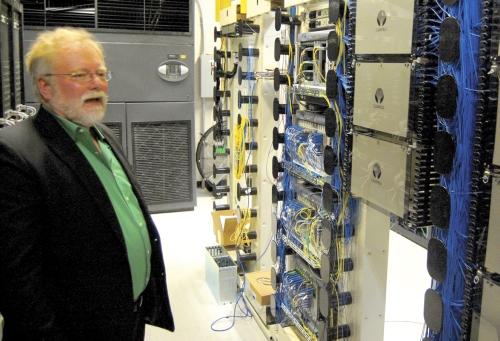 Kent Winrich, Salisbury's director of Fibrant, talks about the different sections of the network's infrastructure in the Network Operations Center, called the NOC, in Salisbury's Customer Service Center.

Kent Winrich said he’s not much of an artist but that he still likes to use visuals when explaining things.

He was scribbling away on a whiteboard in a conference room in Salisbury’s Customer Service Center last week while talking about how the new, recently installed core routers for Fibrant, the city’s municipal broadband network, will dramatically increase the networks bandwidth capabilities.

The analogy he used was when someone turns the shower on in their home while other things — sinks, dish washer, toilet or the laundry machine — are using water causing just a trickle to come out of the shower faucet. A similar scenario can happen with broadband networks during times of “peak demand” when a lot of people are using the network and Internet traffic slows down.

The old routers were at 60 percent to 80 percent utilization, Winrich said, meaning they were losing the ability to keep up with the bandwidth on the network.

The new routers, handling the same amount of bandwidth, are at 4 percent utilization.

“Future proof,” is how Winrich described it.

Winrich joined the city in December after a long career in the private sector working with broadband networks. His customers and clients used to be big TV networks and broadband companies. Now, he serves the residents and businesses linked to Fibrant.

When talking about Google’s plans to build a fiber-optic network in Charlotte in the coming years, and Time Warner Cable’s announcement that it will increase Internet speeds in the region this summer, Winrich said both are a big plus for Salisbury because it brings attention to the area.

“We see Google and all that as being a great addition,” he said.

The more companies offering access to high-speed broadband networks in the region, the better, he said, because it will attract business, and jobs, to the area. He also said its important for customers to have choices.

As for Fibrant, Winrich said the city has done a pretty good job getting residents connected, but that there’s more work to be done bringing local and new businesses on board.

He said Fibrant has a new partnership with the county’s economic development commission, RowanWorks, focused on recruiting startups by offering office space and access to the broadband network. Winrich said small companies, with two or three employees, could use Fibrant for business with an agreement that if the company becomes established it will continue to do business in Salisbury.

Also, RowanWorks and Fibrant are partnering with the UNCC College of Computing and Infomatics to develop a program that will help Salisbury identify companies that are looking to relocate and that would fit well in the area.

Winrich said since he’s joined Fibrant, the team has been evaluating every portion of the business to see if the processes in place are working and, if not, how to fix them.

He said Fibrant’s engineers now have their work peer-reviewed or reviewed by an outside contractor. A few weeks ago, he said, they did a complete changeover of all of the routers and all of the fibers without any customers noticing — and that was the goal: to make sure customers never lost access to the network during the changeover.

“The team I have, they’re great people,” Winrich said about the approximately 30 people he oversees.

Winrich said upgrades to the network will continue in the coming months.

Regarding the Federal Communications Commission’s recent ruling striking down state laws restricting the expansion of municipal broadband networks, Winrich said the city is waiting before it makes any decisions about expanding Fibrant because Tennessee has filed a lawsuit against the FCC’s ruling.

As other cities, like Charlotte with Google Fiber, go through the pains of building a broadband network, people in Salisbury will realize the advantage the city has by being ahead of the curve, Winrich said.

“We’ve got major cities begging for what we already have,” he said, adding that it’s a big deal that Fibrant covers the whole city and not just certain parts.

Going back to the analogy of the shower faucet, Winrich said he wants Salisbury to be the “fastest city in the world” — meaning Fibrant customers will have the most bandwidth available to them at the Internet’s busiest times.

Asked if there currently is a fastest city in the world, Winrich said, “No. Not yet.”