Moose looks to raise awareness about homelessness with cross-state trip 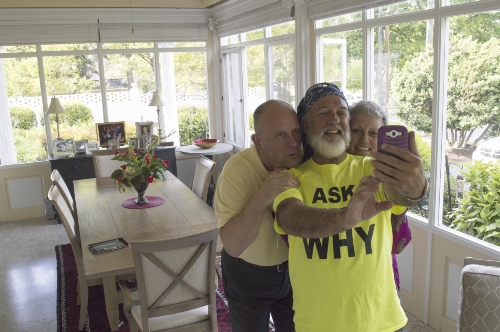 Josh Bergeron / Salisbury Post - Jeff Moose, who is walking across North Carolina to raise money for child homelessness, takes a selfie with Owners of Across the Pond Bed and Breakfast Andrew and Mary Walker after arriving at their house on Saturday.

In an effort to raise money to help homeless children, Jeff Moose is walking across the North Carolina and on Saturday made a bed and breakfast in Salisbury his latest stop.

Moose, a native of Taylorsville and the creator of The WHY Project, started his journey in April on North Carolina’s coast and intends to hike 600 miles, across the state, until he reaches Murphy, the county seat of Cherokee County. Moose hopes to raise $10,000 for A Child’s Place in Charlotte. Moose’s Saturday stop in Salisbury is a little over halfway to his intended destination.

He started walking in early April, but the unofficial beginning of the journey was six months ago, when Moose said he began to learn about the prevalence of child homelessness, especially in Charlotte-Mecklenburg Schools. It’s estimated nearly 4,500 children in Charlotte public schools are homeless.

Later, Moose said he met a family at Walmart that appeared homeless. The woman near the store also appeared to be pregnant, Moose said. He gave the family some food and a blanket. The experience, Moose said, helped propel him to action.

“After I left, I was just thinking, ‘that’s one more child that’s going to be born homeless,’ ” Moose said. “You can’t judge people by their situation and I realized that it didn’t matter about the parents’ situation — whether it was the economy, health reasons or a spat with a family — but it was not that child’s fault.”

Moose said he began to think about ways he could make a difference. He first tried to make plans to hike the Blue Ridge Parkway, over 450 miles, but encountered difficulty finding places to sleep.

“No matter how hard I tried, calling various government agencies and people that lived on both sides of the parkway, I could not get it to work,” he said. “Then I realized why. It was because I wanted to walk the Blue Ridge Parkway and if I could raise some money for kids along the way it’d be great. I had lost focus on what I started out on, and as soon as I stepped back and took myself out of the way, doors opened up all over the place.”

Moose intentionally hasn’t kept track of his donations. If donations to A Child’s Place turn up short of what he expected, Moose said he could become discouraged about the remainder of his journey. Instead he’s waiting until the end to check how the cross-state trek goes.

His route is mostly intended to follow U.S. 64. While planning for the trip, he simply looked for places that might be willing to house him for a night. Andrew and Mary Walker, owners of Across the Pond Bed and Breakfast in Salisbury, said they certainly weren’t expecting Moose’s call, but were glad to offer their support.

Weather has been difficult at times, Moose said. North Carolina residents, he said, have been “absolutely incredible.” The Dare County Sheriffs’s Department, for example, agreed to provide an escort during Moose’s walk across a 5.2 mile bridge.

Moose says he also tries not to approach people asking for donations. Instead, he walks along roadways carrying a backpack and wearing bright shirts with black text that read “Ask Me Why.” His goal is to stay under 15 miles per day. However, he’s walked more and significantly less depending on prearranged places to stay. So far, Moose has stopped in campgrounds, parks, churches and, in the case of Salisbury, a bed and breakfast.

His next stop is in Cleveland. Moose will also stop in Statesville and the Town of Catawba.