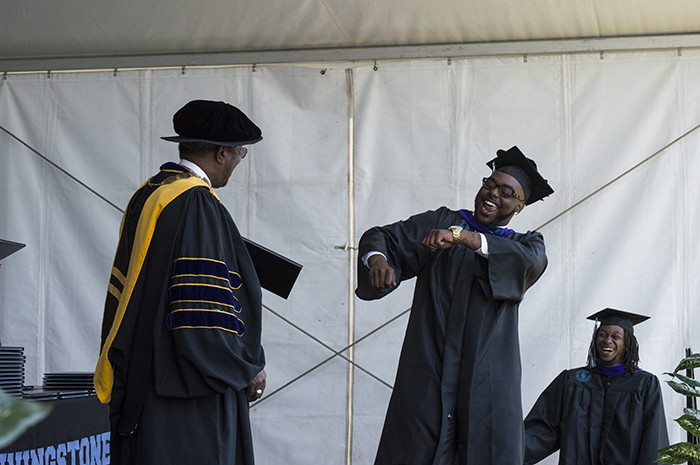 With just a few wisps of clouds in the sky, the college held its commencement ceremony at Alumni Memorial Stadium and presented degrees to 157 students. U.S. Rep. Alma Adams, D-12, was the commencement speaker for the euphoric ceremony. Other speakers included the school’s President Jimmy Jenkins, Board of Trustees Chairman Bishop Georgie Battle Jr., outgoing class president Tre’ Holmes and the class of 2015’s valedictorian Solomon Larbi.

In her speech to the graduates, Adams stressed that graduation was a new beginning.

“While it may seem that we’re in a period with fewer jobs, know that there’s much opportunity for you because you’ve been prepared,” Adams said. “While you could have been someplace else, you weren’t. You were here at Livingstone College.”

Adams, a first-generation college graduate, told her story of attending North Carolina Agricultural and Technical State University — also a historically black college. Adams said NC A&T helped to shape who she has become as a person.

Holmes was undoubtedly the most energetic speaker during the commencement. Beginning slowly, the volume of his voice raised steadily until raucous cheers erupted from classmates, school faculty and family members in attendance.

“I want you to know that today is a new occasion,” Holmes shouted. “This is commencement. The beginning of something different. This is a new beginning for everybody.”

In a speech that lasted just over two minutes, Holmes managed to bring nearly everyone in attendance to their feet, drawing a deafening cheer out of the crowd.

For a moment, the noise quieted to a murmur during the honorary degree presentation. With just three words, Jenkins brought the soon-to-be Livingstone graduates to their feet.

Jenkins stood back and smiled, as the 157 students accepted their degrees. Of the students who received degrees Saturday, three were from foreign countries and 70 were from another state. The remainder were from North Carolina.