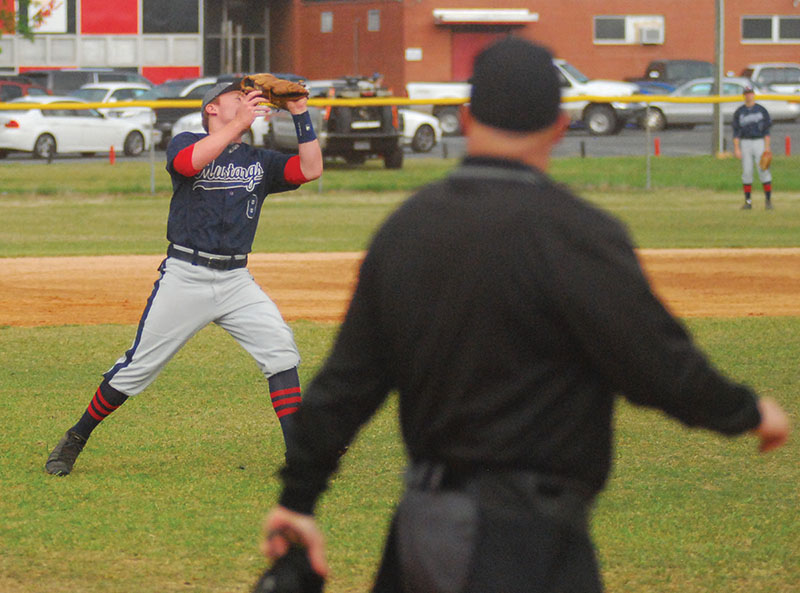 ADAM HOUSTON / SALISBURY POST East Rowan's Jackson Justus (8) snags on a flyball to end the first inning Friday in a South Piedmont Conference game at South Rowan. The Mustangs deeated the Raiders 6-3 to clinch a tie for second place with Carson.

LANDIS — East Rowan’s finishing kick was good enough for a tie for second place in the South Piedmont Conference.

When the Mustangs won 6-3 on Friday at South Rowan, they completed a climb from a 5-5 league mark on April 10 to a 10-6 final conference record. The Mustangs won their last four games and five of their last six. The one they lost in that stretch — 3-0 at home to West Rowan on April 21  — was the turning point, according to coach Brian Hightower.

“That loss to West put our backs totally to the wall,” Hightower said. “Guys had to ask themselves if we were really that bad. We had to decide if we wanted to be a forgettable team or maybe a team that was remembered only because of how bad it was.”

East Rowan, which tied Carson, will be home on Monday in the first round of the SPC tournament. South Rowan tied for fourth with Cox Mill and is expected to host the Chargers on Monday in a first-round tournament game.

South Rowan left-hander Blake Johnson baffled East Rowan when the Raiders shut out the Mustangs at Staton Field on March 25, but the Mustangs (15-9, 10-6) fared better in the rematch. The pitches Johnson located on or just off the edges of the outside corner were balls, and he walked three men in East Rowan’s decisive five-run third inning.

“Blake had walked four men all season and he walks three in one inning,” said South Rowan coach Thad Chrismon, disbelief apparent in his voice. “That was a pretty uncommon inning. Still, we’ve got to do a better job to plug things up. We’ve got to get out of that situation better. We’ve got to keep that crooked number off the scoreboard.”

“We prepared for Johnson for two days,” Hightower said. “You’ve got to think middle-to-opposite field against him and you’ve got to be a little late. We took some walks. We had some good swings. We had the right approach except one at-bat (Joseph Peeler pulled a groundball for a 5-4-3 double play to end the second inning), and I reminded them we couldn’t have that.”

“The first time through the lineup we all took a pitch against Johnson, and the second time through we were swinging at the first pitch if he threw a strike,” East Rowan pitcher Tyler Scruggs said.

Scruggs held the Raiders (14-8, 9-7) scoreless in the second, third, fourth and fifth as his team took charge. He induced 10 outs on popups and flyballs on his way to earning the win.

“Scruggs doesn’t usually pitch up like he did tonight, but he did a good job to make an adjustment,” Hightower said. “He wasn’t getting pitches in or out, so he went up.”

There was a lengthy delay in the sixth when Hunter Travis singled in a run for South Rowan but was thrown out at second trying to advance on the throw home. Travis was down a long time, and emergency medical personnel were summoned to the field. Chrismon didn’t want to speculate, but he believed Travis has a hip injury.

South Rowan scored in the first when Ryan Ashworth singled and came home on Eric Stowe’s double to right-center.

But the Raiders handed the Mustangs an extra run in the fifth on an errant throw with two outs. South Rowan was down 6-1 when it finally got two in the sixth against Scruggs and reliever Alec Hamilton on Joyce’s RBI groundout and Travis’ base hit.

“I liked the way we played after that big inning they had,” Chrismon said. “We had good at-bats. We just couldn’t quite get all the way back.”