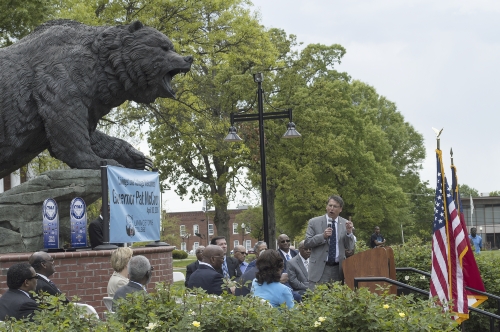 Several other state officials, including Cultural Resources Secretary Susan Kluttz, joined McCrory for a roundtable discussion of a proposed bond package that includes $15 million for the N.C. Transportation Museum in Spencer. Immediately after, McCrory attended an event for Livingstone’s basketball team at the college’s Blue Bear Plaza.

A fundraiser event for McCrory, hosted by Salisbury attorney Bill Graham, was also scheduled for Thursday. However, it wasn’t open to the public.

When discussing the bond proposal, McCrory invoked the names of former presidents Dwight Eisenhower for preservation projects and Teddy Roosevelt for transportation accomplishments, saying both were inspirational leaders. McCrory’s proposal would be two different bonds, combining for nearly $3 billion. One of the proposed bond packages would be for infrastructure, such as the Transportations Museum, and the other would pay for transportation improvements.

“Every part of North Carolina will have an opportunity to build its economy,” McCrory said about the bond proposals.

He said low interest rates are a motivation to proceed with the bond project this year. Waiting would result increased costs if the projects were completed at a later date, McCrory said.

Other nearby projects include $17 million for widening the George Liles Parkway in Cabarrus County between N.C. Highway 49 and Roberta Road, $7 million for up-fitting of Cabarrus County’s State Historic Site at Reed Gold Mine and $168.5 million to complete the interchange connecting Interstate 77 and Interstate 40 in Statesville. The N.C. Transportation Museum project is the only one planned for Rowan.

The $15 million would be used for completing phase two of the museum’s power building renovations, building an outdoor events space, building offices, constructing a hands-on children’s exhibit, a playground and floor replacements, according to Kluttz, a former Salisbury mayor.

During Thursday’s event, Kluttz said the Transportation Museum had never been adequately funded through state government and, when Kluttz took office, her department nearly closed some historic sites because of budgetary problems.

“It’s about quality of life in North Carolina, but it’s also economic development, jobs and tourism,” Kluttz said about the bond proposal’s effect on Cultural Resources.

The N.C. Transportation Museum was chosen, McCrory said, by each department of state government drafting a list of priority projects.

McCrory’s bond proposal must be passed by the North Carolina General Assembly by June in order to meet his goal of making it on the November 2015 ballot. He said educating voters and legislators about the bond proposals would be important for his idea to become a reality.

State Budget Director Lee Roberts said projects in the bond proposal would have a lifespan of 50 years and the bond payments would be over 25 years. Roberts said the last large, general obligation bond was 15 years ago.

“Now is the time to use our balance sheet to responsibly invest in the needs of a growing state,” Roberts said. “It’s not an exaggeration to say that we’re in the top five states, the top 10 percent, in terms of the strength of our balance sheet.”

Roberts said North Carolina wouldn’t need to raise taxes or use gimmicks to pay for the bond proposals.

McCrory toured parts of the N.C. Transportation Museum before departing for Livingstone College to celebrate the Blue Bears’ second straight CIAA championship. The basketball team had previously visited Raleigh to be congratulated by the governor, but it was the first time he had visited the campus as governor. School officials also said it was the first time a sitting governor had ever visited Livingstone.

Unlike his appearance at the Transportation Museum, McCrory’s Livingstone visit did not include budget discussion or a political speech. Instead, McCrory complimented the team and shared stories of his time in Salisbury as a student at Catawba College. One story he shared was of a tennis rivalry with a Livingstone student.

McCrory said he was repeatedly beaten by a Livingstone student named Bryce Holmes, who was inducted into the school’s tennis hall of fame.

“For four years we played, and four years in a row, he beat me,” McCrory said.

He also talked about being a basketball referee and calling traveling on basketball legend Michael Jordan.

McCrory wrapped up his Livingstone visit by presenting a resolution that proclaimed Thursday as “Livingstone College CIAA Championship Day.”

McCrory begins tour of Salisbury with stop in Spencer