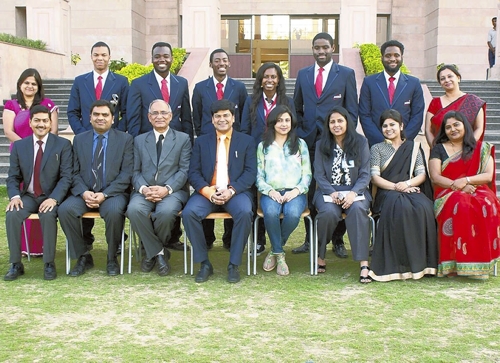 After four years of papers, exams and early-morning classes, a lot of students reward themselves by taking a major trip after college graduation.

But Fabian Burch, Anthony Kyles and Yasmeen Patterson, who will graduate from Livingstone College on Saturday, have already taken what some would consider the trip of a lifetime.

The students and three of their colleagues spent a month in India as part of a study-abroad program between Livingstone and Invertis University in Bareilly, a city in northern India.

The trip was organized by Earl M. Brown, Jr., director of Livingstone’s International Program, and was the brainchild of Livingstone President Dr. Jimmy R. Jenkins, Sr.

The students left for India on Feb. 26 and returned on March 26. And they haven’t stopped talking about the historic trip since.

“The thing that stood out the most for me is probably the humanity,” said Kyles, a sport management major. “The people were really interested in us because we’re from America and they see America as the height of civilization. They were really nice.”

Kyles, who plans to attend Charlotte School of Law in the fall, said the trip was eye-opening in many ways.

“They asked me if I live with my parents, because in India you’re not considered an adult until you marry and that’s when you move out of your parents’ house,” Kyles said. “Here you’re virtually an adult at 18 and you can do what want.”

Joining Kyles, Burch and Patterson on the trip were seniors Sean Bush and Charles Thomas III, and junior Dietrick Mitchell.

The India trip was historic for Livingstone. During the summer of 2013, two students spent 10 days in Peru, but the college had never sent students to another country for such an extended period.

“I’m so grateful we were able to support sending six students to India so they could learn about another culture and see a way of life that’s vastly different from the American way of life,” Jenkins said. “I met with the students a few days before they boarded the plane to travel to south Asia, and I told them I was confident they’d represent Livingstone in a professional manner and have a wonderful time while discovering something about themselves.

“I saw the students shortly after they returned to the states, and it didn’t take long to realize the trip had been exactly what I and Mr. Brown had envisioned,” Jenkins continued. “One by one, the students said it was life-changing, and it was easy to hear the appreciation in their voices.

“Sending six students to another country for a month was a major investment, but there’s no question the students and the college benefitted tremendously from the experience, and we’ll certainly find ways to offer study-abroad experiences to more of our students in the future.”

Currently, Brown and several faculty members are screening students who may potentially be part of a study-abroad trip to China in the fall. In fact, Brown credits Dr. R.D. Sharma, dean of Livingstone’s Division of Business, with helping him bring the India trip to fruition.

Sharma, who has worked at Livingstone for more than two decades, executed the memorandum of understanding with Invertis University officials and also selected two faculty members, Dr. Colin Pillay and Dr. Nisha Singh, to accompany the students on the trip.

“The students who went to India adjusted extremely well in a different cultural environment,” said Sharma, who talked to Brown often to learn how the students were faring. “They learned about India’s culture, economy and education system.

“I’m especially excited because I know the trip will make them more marketable in today’s global society, and the professional way in which they conducted themselves puts Livingstone in a good light.”

Brown met the students at Charlotte Douglas International Airport when they returned to North Carolina. He said though they were clearly fatigued from 16 hours of flying, they perked up while riding back to Salisbury and he sensed they’d developed a higher level of maturity about the way they view the world.

“The students are on their way to becoming global citizens,” said Brown, who has traveled extensively in Africa and also in Europe, Asia and South America. “For example, on Thursday morning, Anthony and Dietrick told me they’d sent text and email messages to inquire about the loved ones of some of the students they met in India, who are from Nepal. Prior to going to India, the earthquake in Nepal would simply have been just a headline to them; however, because of their study-abroad experience, now it’s personal.”

Burch wrote a letter to Jenkins, Brown and Sharma while he was in India.

“There’ve been many breath-taking events and sites that we’ve been able to witness or see,” Burch wrote. “We visited the Taj Mahal, Agra Fort, Akbar’s Tomb, Nanital and many more places. No words could ever explain the moments we’ve been blessed to experience. From the moment we set foot on campus, the faculty, staff and student body welcomed us with open arms.

“Even in the classroom, the students and teachers greet us with respect, and we return it. We know we’re representing not only ourselves but also Livingstone College and The United States.”