Volunteers still needed for May 16 Blues and Jazz Festival 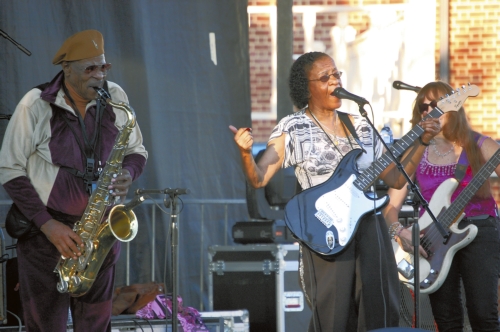 Mark Wineka/Salisbury Post file photo Beverly ‘Guitar’ Watkins, center, performs at a past Rowan County Blues and Jazz Festival, this one from October 2011. She will return to Salisbury for the festival on May 16.

SALISBURY  — West End Mambo, Peter Harper, Beverly “Guitar” Watkins of Atlanta and the Joe Robinson Revue are among the headline acts for the Rowan Blues and Jazz Festival on May 16 in Salisbury.

As announced earlier, this year’s festival has a new location from years past. The stage will be set up in the parking lot at the corner of North Lee and East Kerr streets, in the center of the Railwalk Arts District.

It is across from Lee Street Theatre.

The day actually starts at 10:30 a.m., with storytelling at 405 N. Lee St., in the former Black Box theater. Beverly F. Burnett, president of the N.C. Association of Black Storytellers, will be host for the storytelling, held in honor of the late storytelling great from Rowan County, Jackie Torrence.

Gates open at 1:30 p.m. for the music festival, and musical performances will last from 2-10:30 p.m. Several craft and food vendors will be on site throughout the day.

The event’s founder and chief organizer, Eleanor Qadirah, said the Salisbury Mini Funk Factory Band, consisting of elementary school students, will usher in the day of music by marching to the site from North Main Street and West Kerr Street.

The New Orelans-styled elementary school band also will be introducing its featured vocalist.

General admission is free, though $20 VIP tickets are available online at www.eventbrite.com/e/16th-annual-blues-and-jazz-festival.

The VIP passes include space under a large tent and free food and drinks.

Those coming to the festival are encouraged to bring their own chairs and/or blankets. No pets or coolers are allowed. Qadirah said the downtown area around the site offers plenty of free parking.

After a run of 15 consecutive years, Qadirah and the Rowan Blues and Jazz Society did not put together the Blues and Jazz Festival in 2014, but it proved to be only temporary because she kept hearing from people who had missed it.

This year’s 16th edition also is being held in the spring for the first time, not the fall.

As Qadirah puts some of the finishing touches on this year’s festival, she is sending out a plea for more volunteers to help her and other Rowan Blues and Jazz Society members. For more information, visit www.rowanbluesandjazz.org, or 704-636-3277.

This year’s acts include Atlanta’s Watkins, who just celebrated her 76th birthday and was a popular performer at the festival in 2011. She is a two-time cancer survivor who just released a new CD titled, “Back in Business.”

Formed in 1999 and based in Winston-Salem, West End Mambo is made up of musicians from North, South and Central America, as well as the Caribbean. According to the group’s website, the nine-piece Latin jazz band “performs a fiery mix of classic salsa from bolero and rumbas to guaracha and son montuno.

Harper is a multi-award-winning, Australian-born singer and songwriter. He’s known for creating a mix of original world, blues and roots music with soulful vocals, wailing harmonica and the haunting drone of the didgeridoo.

Midwest Kind, his band, is based out of Michigan.

The Joe Robinson Revue of Clemmons, always as regular at the festival, also will be on hand.

Qadirah said proceeds from the festival go to pay the artists.