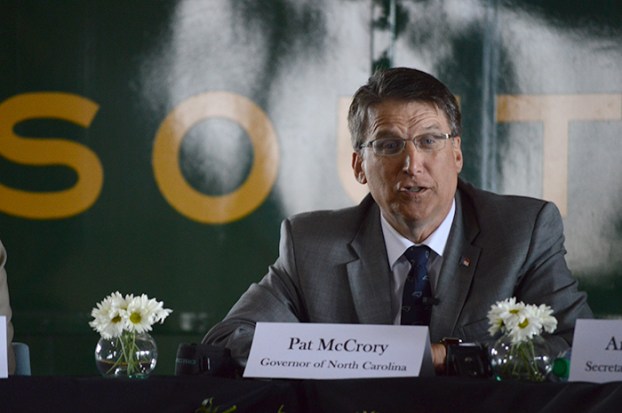 McCrory begins tour of Salisbury with stop in Spencer

Gov. Pat McCrory began his Thursday tour of Salisbury at the N.C. Transportation Museum to speak about a multi-billion dollar bond proposal that includes funding for renovations at the facility in Spencer.

McCrory was joined by a group of other state officials, including Cultural Resources Secretary Susan Kluttz., former mayor of Salisbury.

The bond proposal includes $15 million to renovate multiple facilities at the museum, including the former powerhouse building and an outdoor events space. It also includes transportation projects across the state.

The governor said state officials and residents of North Carolina have a responsibility to leave the state in a better condition.

“If we wait, we know it’s going to cost the taxpayers,” McCrory said.

His tour of Salisbury continues at Livingstone College at 2:30 p.m. to congratulate the school’s basketball team on winning a conference championship. McCrory is also scheduled to attend a fundraiser event this evening in Salisbury.

The 2015 Spencer and Faith Jaycees awards were presented Wednesday night at the Rowan County Museum. The winners were: •... read more