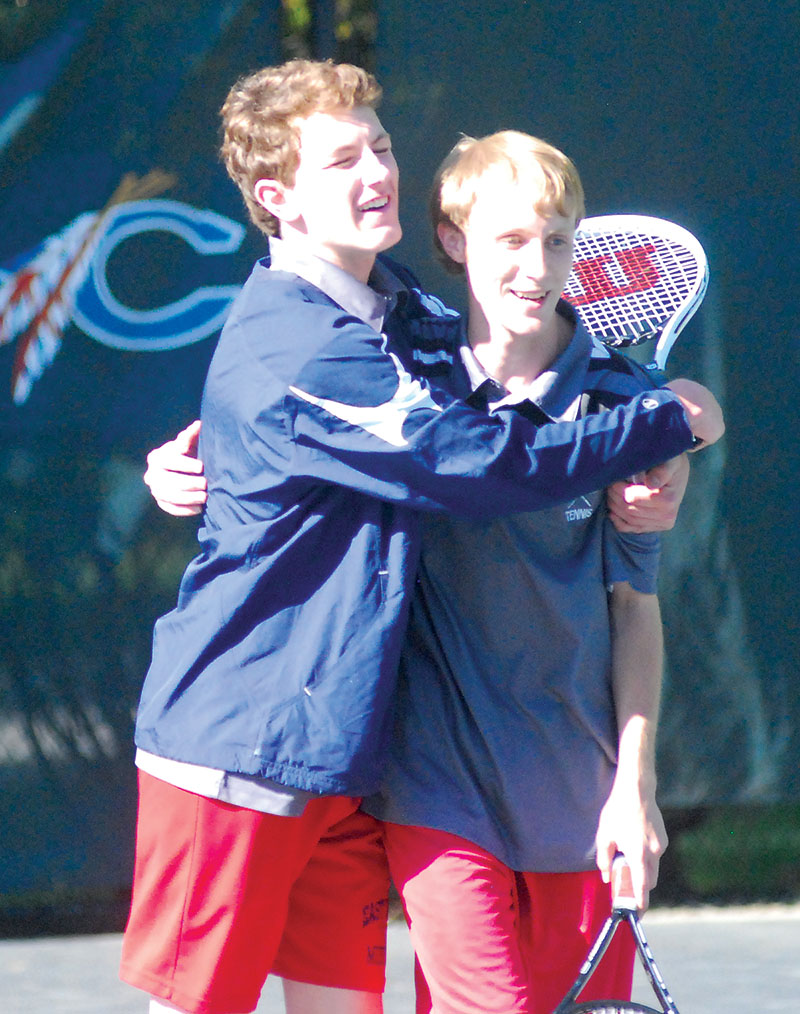 ADAM HOUSTON / SALISBURY POST East Rowan's Trevor L'Hommedieu (left) and Jeremy Price (right) celebrate after securing the clinching point Tuesday in the Mustangs' 6-3 victory over North Buncombe in the first round of the 3A dual-team state tennis playoffs.

SALISBURY — East Rowan’s boys tennis team is undefeated and owns signature wins against Salisbury and Concord, so not many saw Tuesday’s struggle coming.

The Mustangs dropped two singles matches that went to tiebreakers, but they came back to take two doubles matches and got past North Buncombe 6-3 in a first round match in the 3A state dual team playoffs.

“Before this match I was actually looking ahead to who we’d play next,” East Rowan senior Jeremy Price said. “It was unexpectedly tough, but we pulled it out.”

The match was played at Catawba’s Johnson Tennis Center. North Buncombe (9-5) had to make a trip of more than three hours from Weaverville, just north of Asheville, to take on the Mustangs.

The visitors showed little weariness and split the singles matches. East Rowan got a breezy win from Chance Brown at No. 2, Price won at No. 3, and Nik Pillsbury prevailed at No. 5. But East Rowan’s Ike Emerson (No. 1) and Addison Fry (No. 4) lost in tiebreakers, while Trevor L’Hommedieu fell at No. 6.

“There was some nail biting out there,” East Rowan coach Jon Heidrick said. “No one has played this close. This was a new feeling.”

East Rowan (12-0) was missing one of its better players. The Mustangs were minus Gordon Krause, a junior who normally plays No. 3 singles and No. 2 doubles. Krause’s absence due to illness had the greatest impact on Price. He had to move up one slot in singles and also had to embrace L’Hommedieu as a new doubles partner.

“We’re fortunate to have someone as good as L’Hommedieu as a backup,” Heidrick said. “Not many teams have a guy like that.”

The No. 3 doubles team of Fry-Pillsbury won with relative ease to push the Mustangs into a 4-3 lead, but there was still plenty of drama. Brown and Emerson were in a tough fight at No. 1 doubles, while Price and L’Hommedieu started strong but then ran into trouble in No. 2 doubles.

“I was adjusting to a new partner and we just weren’t clicking for a while,” Price said. “Tension was rising, and I got angry at myself. But then Coach calmed me down.”

That No. 2 doubles match went to a tiebreaker, but the new Price-L’Hommedieu team got it done, winning 10-8 to secure the match for the Mustangs.

“I said a little prayer before we went back out there for the tiebreaker,” Price said.

Emerson and Brown won their first set with some dazzling play, but they dropped the second. They got it back together in time to win a 10-5 tiebreaker.

Brown, a junior, is a tireless bundle of nervous energy, small but exceptionally quick.

“That was a tough match and we played one of our best matches of the year to pull it out,” Brown said. “Ike hits it hard and I run balls down. We make a good team.”

It wasn’t a routine day for the Mustangs, but it was a successful one. They’ll have another home match next Tuesday in the second round. Heidrick hopes the Catawba courts will be available again.