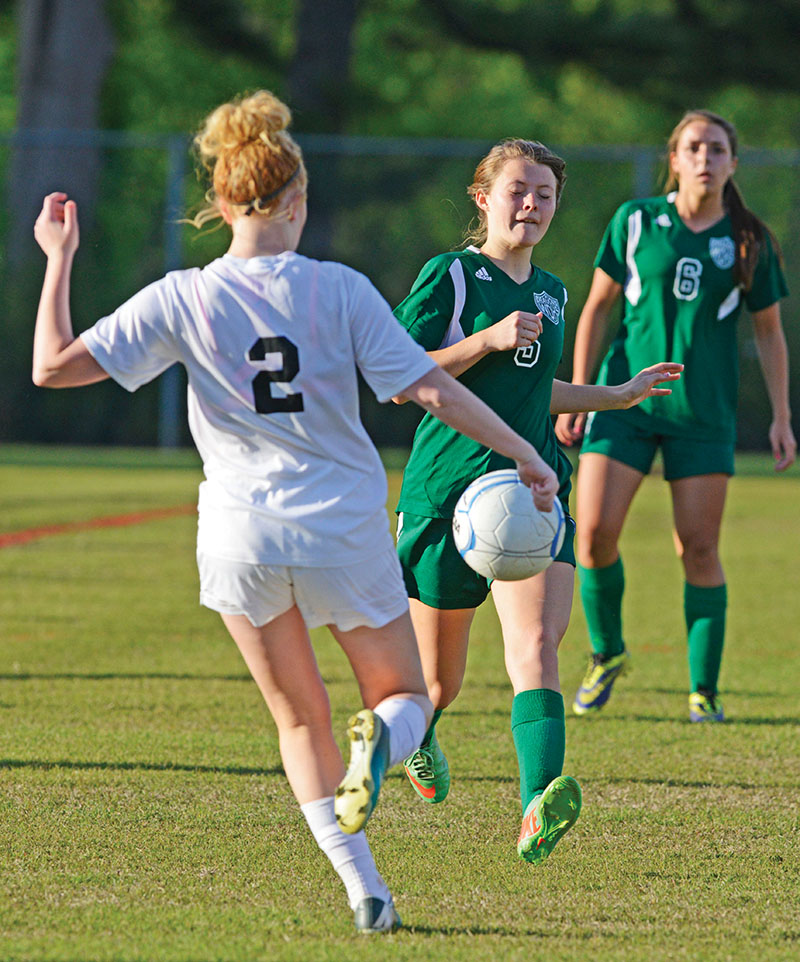 Photo by Wayne Hinshaw/For The Salisbury Post Salisbury’s Mary Seifert (2) comes in against West Davidson’s Erin Newby (3) to compete for the ball Tuesday in a Central Carolina Conference game at Salisbury. The game ended in a 0-0 draw.

SALISBURY — West Davidson didn’t beat the Salisbury girls soccer team Tuesday, but it did put the Hornets in their place. Second place.

A 0-0 tie at Ludwig Stadium all but secured the visitors a second consecutive Central Carolina Conference title and left Salisbury nestled a game-and-a-half behind with two to play.

“We’re proud of the way we played,” Salisbury sophomore Nellie Brown said. “It’s the result that’s frustrating. We had to win. A loss does us no good.”

“That’s a team that beat us 2-0 (on April 17), and it was scoreless after 67 minutes,” he said. “And they got two breakaways. So tonight we worked on containment and defensive overlapping. I believed that if we could contain their speed, we would limit their opportunities.”

They did. Much of the 100-minute match was played in the midfield and on the ground, not above it. Scoring chances were few are far between as West Davidson freshman Karmen Idol effectively handcuffed Salisbury scoring machine Ceci Cardelle. And Salisbury’s defensive wall of Brown, Kathryn Rusher, Mary Seifert and keeper Juliana Anderson (seven saves) may have buckled occasionally, but never broke.

“We couldn’t connect anything in our top offensive third,” said West Davidson coach Chris Brown after the Dragons (13-3-1, 8-0-1) extended their unbeaten streak to 14 matches. “It wasn’t just us. It was a lot of them. We’d send the ball down the sideline and try to penetrate, but they’d have three girls waiting for us.”

West Davidson clinched at least a tie for the league championship with its eighth shutout in a row. It has outscored CCC opponents 64-1 and hasn’t allowed a goal since April 1.

“The outcome is frustrating, but that’s all,” said Rusher, a junior defender. “We knew it would come down to containment. When they’d attack, we’d back up. Even if we were giving up 30 yards, it made them think about what they were doing. And that helped us.”

Salisbury’s best scoring opportunity came with six minutes remaining in the second half. Left-footed halfback Katie Bullock pushed a strong corner kick to the goalmouth, but the ball was deflected and ping-ponged toward the Hornets’ Julia Honeycutt. The freshman stepped forward, settled the ball and fluttered a 15-yard shot wide right.

“I wanted to keep it on frame, below the cross bar,” Honeycutt said. “But you’ve got to play and shoot with more confidence. You can’t win a game if you don’t shoot.”

Honeycutt had another chance early in the second 10-minute overtime period. This time her corner kick from the left corner — a low line drive on goal — was swallowed by West Davidson keeper Ragan Dalton.

The Dragons never really threatened to score, a tribute to Salisbury’s defense.

“We weren’t very aggressive,” Brown said. “Sometimes we’d put the ball back away from pressure instead of attacking the space available.”

When the match ended Parrish praised the Dragons and tossed his own team a verbal bouquet.

“They had five seniors coming back and we had two,” he noted. “It was their league to win and they did it. But we limited our mistakes and fought tooth and nail. I would rather go down swinging, playing for the win, than sit back and play for a tie.”