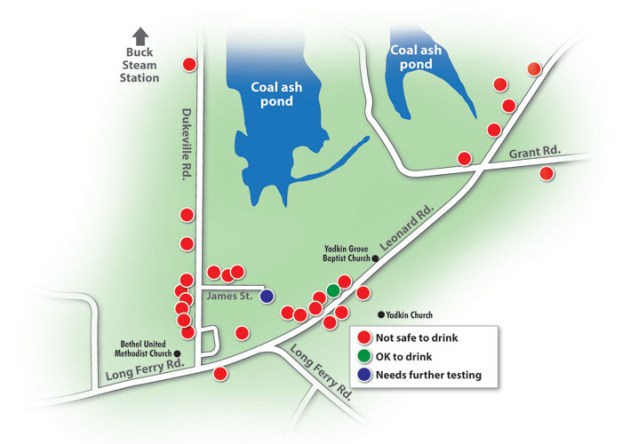 Duke offers water to families after most recent test results

When questioned about the results, Spokeswoman Erin Culbert said Duke Energy would provide water on a temporary basis to families who are unable to drink private well water. Culbert, however, reiterated a previous claim that the company wasn’t responsible for the abnormal test results.

“We know this information has been confusing, and we are eager to talk with these neighbors to answer any questions they have,” Culbert said in an emailed statement “We also are offering to provide alternative water to these residences on a temporary basis until the groundwater studies are complete in a few months. Neighbor wells near Buck so far have not shown any elevated levels of boron, which is a key indicator of groundwater potentially impacted by coal ash. We have no indication that plant operations have influenced neighbors’ well water based on results to date, but we want to give people peace of mind and offer water in the meantime while we learn more.”

The unsafe private water wells are clustered near the intersection of Long Ferry and Dukeville roads and extend east onto Leonard Road. Test results for a residence on James Street were inconclusive. Test results for a well on the 200 block of Leonard Road showed the water was safe to drink. All other tests results returned to residents as of Monday afternoon advised well water wasn’t safe.

The State’s Coal Ash Management Act of 2014 requires testing of wells within 1,000 feet of a coal ash pond. A total of 51 wells near Buck Steam Station are a part of tests, according N.C. Department of Environment and Natural Resources spokeswoman Susan Massengale. More residents will receive letters as test results are available, Massengale said.

The most common contaminant listed on the state’s results is vanadium — occurring naturally and in coal ash. The most recent 12 letters also include abnormal levels of hexavalent chromium. Both compounds are toxic at certain exposure levels, according to the Occupational Safety and Health Administration.

James Gobble, who has lived in his house on Dukeville Road for 40 years, said his wish is simply for Duke Energy to be a good neighbor. Gobble, one of the most recent 12 families to receive test results, said providing bottled water to families in Dukeville isn’t enough. The company should build a water line to the rural community, he said. Gobble said his family stopped drinking its well water before the most recent tests.

“I don’t feel like bottled water is the solution,” Gobble said. “It shouldn’t be the solution.”

A water line extension from the end of Salisbury-Rowan Utilities current line would be a little over 1 mile to Dukeville Road from its current location, according to a map of the system.