Rockwell board to park goers: No Smoking 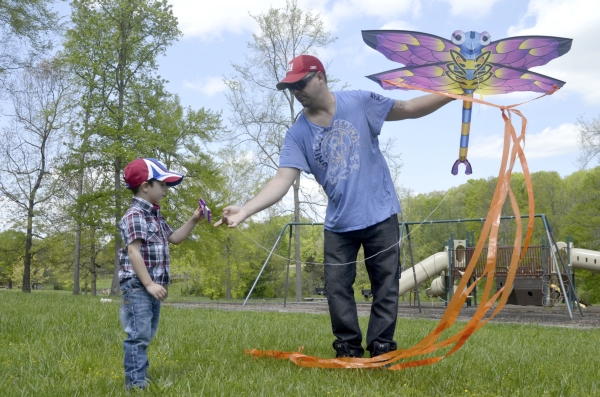 Dennis Reilly and his son, Pat, 4, spent time Tuesday at Rockwell Park where recently the town board banned smoking. Reilly said he quit smoking not long ago and the ban won't affect him, but he understands park goers who may want to smoke while out. Shavonne Walker/Salisbury Post

ROCKWELL — If you go to Rockwell Park and plan to smoke while there, don’t. The town board recently made a decision to ban smoking at the park, town officials say, because of the cigarette butts that have accumulated throughout the property.

The park encompasses over 13 acres and includes three picnic shelters, a baseball field, basketball court, a walking trail and playground.

The town had three designated smoking areas at the shelters complete with cement smoking pots at each. However, someone stole the smoking pots and eventually people began putting their cigarette butts anywhere — the ground, trash cans and inside the bathroom, said Mayor Beau Taylor.

Taylor said it does create a potential fire hazard, but more than that it’s really a matter of cleanliness, and it’s a nuisance.

The board approved the decision a week ago and the decision became effective then. Now the town is working on erecting signs that alert park goers to the change.

Taylor said the park gets heavily used on the weekends when people rent the shelters and families go out. On Monday, the public works department spent their time cleaning up cigarette butts, he said.

Right now there is no definitive enforcement policy in place, but Taylor said town officials will have to soon revisit the decision to discuss enforcement and possible fines, if caught.

“We have a nice park here,” Taylor said while walking toward the playground.

He said he found several cigarette butts littering the military memorial near the parking lot. There were several other butts at the playground and near the trash receptacles.

“Most people won’t like it, but I think most will honor it,” Taylor said of the new policy.

Les Shultz works at Supply One and goes to the park every day during lunch. He’s not a smoker and said the ban won’t impact him.

He feels as though the people who leave cigarette butts have no respect for the park and others.

He personally hasn’t seen smokers at the park, Shultz said, but he sees the remnants left behind.

Dennis Reilly went to the park Tuesday afternoon with 4-year-old son Pat to fly kites and said he recently quit smoking but has taken to using E-cigarettes.

He’d like to not see a total ban, but designated smoking areas.

Two women, who were on their way back to work, were at the park for lunch. Both were smokers who said they’d also like to see a designated smoking area instead of a ban.

In January 2014, the city of Salisbury banned smoking in all of its town parks, greenway spaces and ball fields.