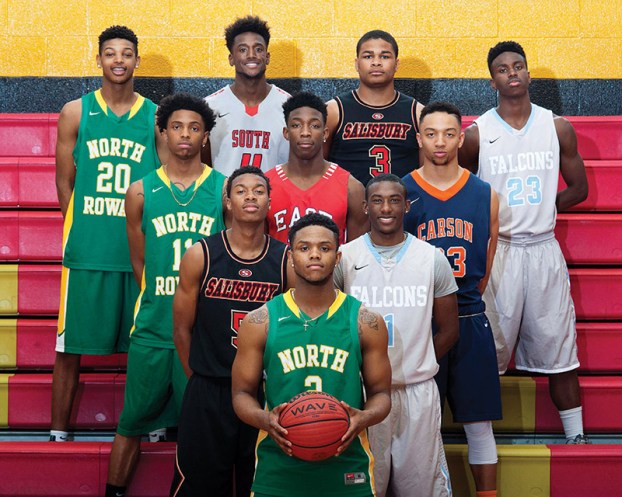 Jalen Sanders, North Rowan, Jr. guard — The Rowan County Player of the Year led the county with 17.8 points per game and was held below double digits only once in a consistent season. Already a 1,000-point scorer. Runner-up for CCC Player of the Year.

Celexus Long, West Rowan, Sr., guard — The cancellation of the SPC tournament was a bad break for Long, who concluded his fine career with 990 points. The Sam Moir Christmas Classic MVP, Long scored 20 or more five times and averaged 14.0 points per game. All-SPC.

Josh Handy, North Rowan, Jr., forward  —  Handy missed two games with an ankle injury and four with a broken wrist, but in the 20 games he played, he averaged 14.1 points and was in double figures 17 times. Handy topped 20 points four times. All-CCC.

Joseph Scott, North Rowan, So., guard — Scott is only 6-foot-1 but did almost all of his damage on layups and stickbacks. Scott averaged 13.0 points per game for the season and 18.3 per game in North Rowan’s four playoff games.

Greg Joseph, West Rowan, Sr., forward — Joseph improved as much from his junior season to his senior season as just about anyone in county history Joseph averaged 3.9 points as a junior but he perfected a turnaround jumper and was consistently in double figures as a senior. All-SPC.

Honorable mention (All-conference or nominated by coach for all-county)

MOUNT ULLA —  The mark of a good player is not taking a frustrating at-bat into the field when it’s... read more