Next generation of mosquito experts developing at Catawba College

The next generation of mosquito experts is being trained and developed at Catawba College.

The process began in 2014 under the tutelage of Catawba biology professor Dr. Carmony Hartwig and Dr. Bruce A. Harrison, a retired former medical entomologist for the U.S. Army, and later, for the N.C. Department of Environment and Natural Resources.

In 1993, shortly after the Catawba College’s Ecological Preserve was established, Harrison began research in the preserve with Catawba’s Dr. George Drum, now a professor emeritus of biology, on tick and mosquito vectors that may transmit bacteria or viruses involved in human disease.

By the end of 1996, Harrison and another associate, Parker Whitt, determined that there were 30 different species of mosquitoes in the preserve.

Nearly 20 years later, Hartwig and her students have identified 28 species of mosquitos in the preserve in collaboration with Harrison. They also noted a substantial change in species composition over the past 20 years.

Hartwig and her students are working with Harrison on mosquito diversity and natural history, not only identifying the mosquito species morphologically, but confirming their identifications through molecular typing of a conserved gene. By assisting Hartwig and her students, Harrison is integral in developing and training the next generation of mosquito experts.

“This is a great opportunity for us, and a fantastic research experience for our students,” Hartwig said Harrison “has a passion and a natural talent for teaching and conducting mosquito research.”

Harrison has shared his records from 1993-96 with Hartwig and her students to compare to the data they have collected. During his initial surveys, only 56 species of mosquitoes were known from North Carolina, and now there are 65 species recognized in the state.

This increase occurred because of extensive and widespread collections conducted across North Carolina by Harrison and Whitt until July 2011, when the state program was abolished. With Hartwig, her students and oversight from Harrison, additional species may be found in the preserve.

Identifying mosquitoes is much more difficult than one might think, Hartwig said.

Most of the species identification that she and her students have done has been with a microscope because “you can’t identify species with certainty using the naked eye,” she added.

To get the mosquitoes under a microscope, Hartwig and her students must first trap them, using a standard Centers for Disease Control light trap. Dry ice placed alongside the light trap emits carbon dioxide, which attracts the mosquitoes into the collection container.

When viewed under the microscope, Hartwig says, the mosquitoes are “beautiful and complex,” and their numerous body parts, which can vary ever so slightly from species to species, must be examined carefully before exact identification is possible.

An examination entails a visual study of the proboscis, thorax, abdomen, wing scales, halters, and hind tarsi and legs. Minute details such as the presence and color of the scales on their heads, thorax and abdominal segments are vitally important. If any one of these features is missed, one might misidentify a species. 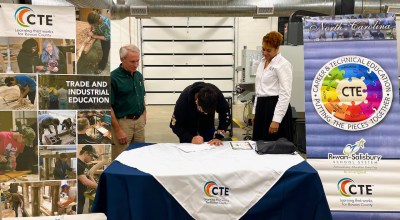 Tradition, faith and family prevail through 133 years at…