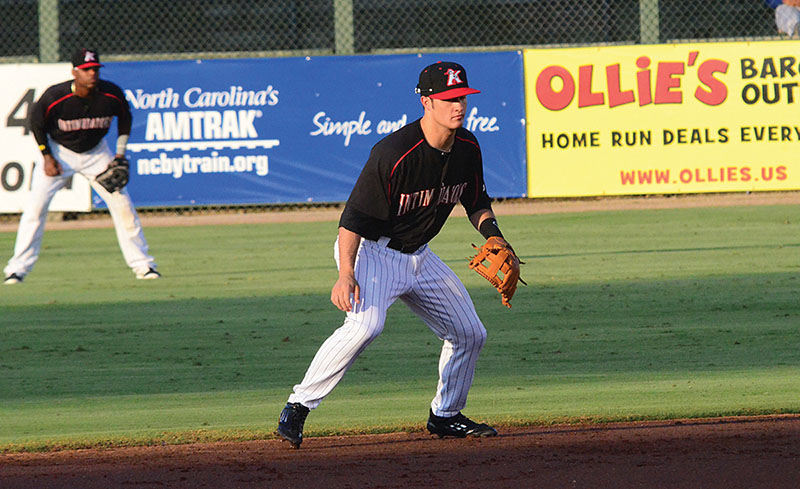 Courtesy of Kannapolis Intimidators Infielder Eddy Alvarez is back in Kannapolis for another season. Alvarez, 25, figures to be one of the main contributors for the Intimidators in the 2015 season. In 18 games last season, he hit .431 with three home runs.

The Intimidators are still coming together. After what manager Tommy Thompson called just two-and-a-half days of practice, the players and coaches take the field at 6:35 p.m. Thursday for their season opener against the Lakewood BlueClaws.

“I haven’t seen the whole team much together, so I’m just learning them as the coaching staff is,” said Thompson, who is in his third stint leading the Intimidators.

Thompson went back and forth between coaching Kannapolis and the Winston-Salem Dash, the White Sox’s High-A affiliate, since 2011. The Intimidators went 76-62 in 2011, and the Dash finished 2012 87-51. They were the Carolina League runner-up after losing to Lynchburg in the championship series. Thompson, a minor league player with the Braves and White Sox organizations from 1979-88, was named the Carolina League manager of the year following that 2012 campaign.

Kannapolis, the Single-A affiliate of the White Sox, is all about learning. In addition to figuring out everything essentially on the fly ahead of the season, Thompson said the players are learning “the White Sox way” and how to navigate a full 140-game minor league season.

“It’s the struggle to reach the top. There is not one person not willing to go through that,” said returning infielder Eddy Alvarez, who won a silver medal on the U.S. 5,000-meter relay speed skating team in the Sochi games. “We’re definitely going to keep our heads down and work through it. Hopefully, when the fourth month comes through, I can be a source of energy.

“Those middle months, that’s when everybody starts to get flat and the energy dies down. This sport is such a grind. I know a thing or two after training 11 months for 42 seconds [for an Olympic speed skating trial].”

Eddy Alvarez: The 25-year-old played only 18 games in a Kannapolis uniform, but he smashed three home runs and six doubles on his way to a .431 batting average. In nine games in the field, he had a .933 fielding percentage. Alvarez said he worked on adjusting to the speed of the game and searched for ways to slow down the action.

“He looks exciting. He looks professional. He look like a man,” Thompson said. “He definitely plays the (expletive deleted) out of shortstop. From what I saw, he’s had some really good days. He’s fun to watch.”

“I think he’s going to be a real good player and has a chance to play at the highest level,” Thompson said. “I’ve seen a lot of things in a few short days.”

Spencer Adams: A newcomer to pitching rotation. Adams, who is slated to start Friday, went 3-3 in nine starts and had a 3.67 ERA last year in the Arizona League. He had a season-high nine strikeouts in six innings on Aug. 2, and he matched that six days later. Adams said he learned last year “a commanded fastball can be your best friend” because of its versatility.

“I see a lot of talent and a lot of ability,” Thompson said. “…He’s very young. We’re going to have to protect him and how much he throws. That’s going to be the big challenge with the quality of players in the league. There is a lot of talent.”