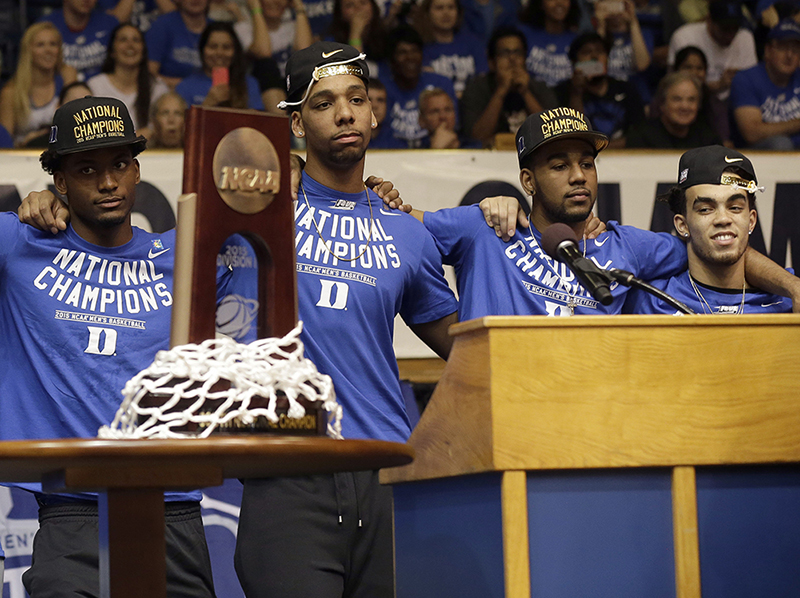 The Associated Press Duke's Justise Winslow, Jahlil Okafor, Matt Jones and Tyus Jones are welcomed at Cameron Indoor Stadium on Tuesday. Winslow, Okafor and Tyus Jones could potenitally jump to the NBA after just one season in Durham.

DURHAM, N.C. (AP) — Now Duke waits to find out if any of those star freshmen will go won and done.

Coach Mike Krzyzewski says in the coming days, he will discuss future plans with each of his players — including Jahlil Okafor, Justise Winslow and Tyus Jones, the most outstanding player at the Final Four.

All three players said Wednesday that nothing has been decided yet. Krzyzewski said any possible pro declarations, “I’m sure will occur shortly.”

Okafor has said it’s a “business decision” with some very emotional components: He and Jones have been friends since the third grade and planned for years to play college ball together.

During the on-campus rally to celebrate the program’s fifth national title, Krzyzewski said this was “my favorite year” — a strong statement from a Hall of Fame coach with more than 1,000 career victories and five national championships.

Duke (35-4) earned championship banner No. 5 with a 68-63 win over Wisconsin earlier this week in Indianapolis.

“Whether guys go early or whatever, I really felt these guys never thought of” the future, Krzyzewski said, adding that senior captain Quinn Cook “was never thinking, where am I going to end up? Like a lot of seniors in college. … Those are things you don’t teach. I think they have (those qualities). … They were always believers, and they kept getting better.”

He praised the players’ camaraderie and their willingness to share the glory with each other.

“There’s always somebody that came through during a game,” Krzyzewski said. “And none of the guys cared who it was. So none of them had to have the spotlight.”

Okafor led the team in scoring (17.5 points per game), rebounding (8.6 rebounds per game) and field-goal percentage (67 percent) — becoming the first freshman in program history to lead the team in all three categories.

Without question, the freshman class — which also included title-game surprise Grayson Allen, who said the possibility of leaving early “is not a question” — was the backbone of this team.

If they leave, another class of highly rated freshmen is coming in behind them: 6-foot-10 center Chase Jeter and 6-5 guard Luke Kennard — both five-star recruits — have signed.

And Sean Obi, a 6-9 forward who averaged 11.4 points and nine rebounds at Rice in 2013-14, will be eligible after sitting out this season due to transfer rules. He’s the only scholarship player on the roster who wasn’t a McDonald’s All-American.

“We knew (the title game) was more than likely going to be the last time we played with each other,” guard Matt Jones said. “Whatever (the future) holds, it’s still up in the air, but we knew that next year will be different.”

Krzyzewski became the first Division I men’s coach to push his career victory total into four figures, reaching the milestone with a 77-68 win over St. John’s. After Duke lost its next game at Notre Dame, Krzyzewski kicked a player off the team for the first time in his 35-year stint in Durham, dismissing Rasheed Sulaimon for reasons that remain not entirely clear.

That left Duke with just eight available scholarship players — but that shortened roster went on to win 18 of its final 19 games, capped by that victory over the Badgers. It made Krzyzewski only the second coach — joining UCLA’s John Wooden — with a handful of NCAA Tournament titles.

“It’s a hell of a feeling,” Krzyzewski said of coaching a championship game. “And if you win it, forget it. There’s nothing like it.”