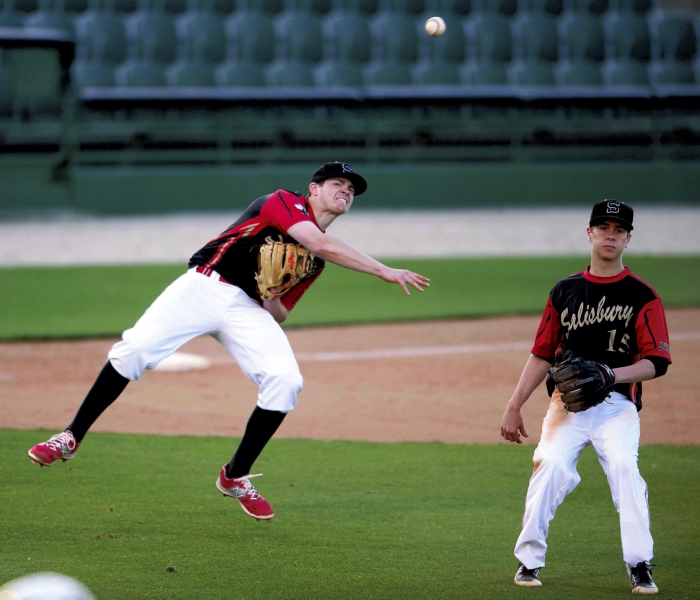 JON C. LAKEY / SALISBURY POST Salisbury pitcher Harrison Smith (11) fields a short infield hopper and fires to first base for an out, during Saturday’s 10-7 win over Northwest Cabarrus in Kannapolis.

KANNAPOLIS — Salisbury coach Scott Maddox didn’t mention it, but last season’s embarrassing 17-3 loss to Northwest Cabarrus in the F&M Bank Classic had not been forgotten by his veterans.

The Hornets got some payback on Saturday, beating the Trojans, 10-7, in a tournament semifinal and advancing to Monday’s 6:30 p.m. championship game against Jay M. Robinson at CMC-NorthEast Stadium.

The 2A Salisbury team (8-3) was considered the least likely of the three Rowan County teams in the event to make the final, but it pounded out 13 hits. That was enough to compensate for the Hornets’ defensive mistakes the walks issued.

“I’m proud of the guys because we’ve won more than we did all of last year when we went 7-17,” Maddox said. “It’s not like we played that well — we really didn’t play well at all — but we did hit well and I liked the leadership our older players showed.”

The Hornets had a month’s worth of two-out hits. They scored their first eight runs with two men out.

“When you play as a team and someone gets a hit, then everyone hits,” senior Ryan Jones said. “Guys did a really good job with two outs, and for the second straight game, we scored a lot of runs.”

Everyone in Maddox’s lineup had at least one hit. Jones had three. Riley Myers and Alex Yang had two each.

Two-out singles by Alex Yang and winning pitcher Harrison Smith gave the Hornets a 2-1 lead in the bottom of the first inning. They never lost it.

“We took live batting practice and that helped, and then we had good approaches at the plate,” second baseman Alex Yang said. “Pitches that were away, we hit hard up the middle and to the opposite field.”

Jones and Myers delivered two-out hits in a three-run second inning for a 5-1 lead. Myers’ two-out triple and a run-scoring single by J.T. Austin made it 7-2 in the fourth inning. John Yang’s two-out double made it 8-4, an inning later.

“Besides hitting well, we ran the bases aggressively,” Maddox said.  “I made a mistake last year by being too conservative. We’re running more this year. We’ll make some outs on the bases, but it’s been paying off.”

Northwest Cabarrus (3-8) got a two-run single from Adam Barrows in the fifth frame to stay in the game and put pressure on the Hornets in the sixth when a tiring Smith walked three straight batters to start the inning. Jones relieved Smith with the Hornets ahead, 8-4. Alex Rodriguez hit into a force play for the first out, but a run scored to make it 8-5.

Then Jones threw the biggest pitch of the game. He got a comeback grounder for an inning-ending 1-6-3 double play.

“The first thing I had to do was make sure I caught the ball, and I could already hear (shortstop) Riley Myers shouting to me,” Jones said. “We’ve got a connection. As soon as I made a good throw to second base, I knew we had the double play.”

Myers threw a lot of passes to Jones on the football field. This time Jones made a completion to Myers.

Even after Salisbury tacked on two more runs in the bottom of the sixth inning on RBIs by Austin and Chandler Lippard, it wasn’t easy. NWC scored twice in the seventh on a clutch, two-out hit by Chris Monteleone, but Jones got a game-ending strikeout with the tying run at the plate.

Smith helped himself with the defensive play of the game on a barehand pickup and off-balance throw to get an out in the fourth inning.

Maddox has coached the Hornets since 2001 and doesn’t remember them ever being in an Easter tournament championship game, so Monday will be something new. He has no plans to use his ace, as Myers will be pitching Tuesday’s CCC game against North Rowan. Jones and freshmen Griffin Myers and Lippard are the likely hurlers for the Hornets.

“We’re excited, but it’s not like we’re just excited to be in the championship game,” Alex Yang said. “We want to win it.”

Northwest will play South Rowan for third place at 4 p.m. on Monday.