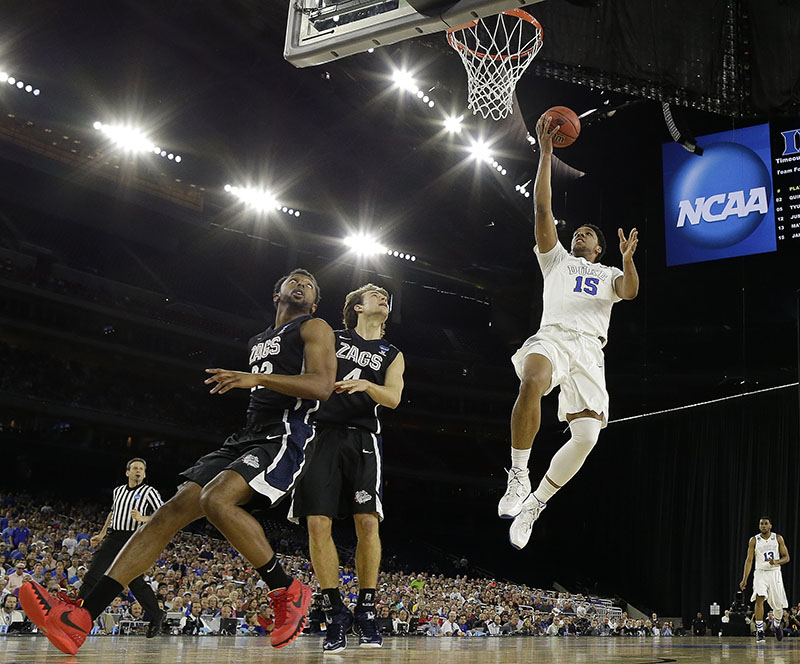 The Associated Press Duke's Jahlil Okafor (15) shoots against Gonzaga on Sunday during the first half of the Blue Devils' Elite Eight win over the Bulldogs in Houston. Okafor is one of three freshmen starting for the Blue Devils who could declare for the NBA Draft after the end of the season.

DURHAM, N.C. (AP) — There was a time when Duke’s Mike Krzyzewski led Final Four teams built around players who stayed for years to grow into tournament-tested veterans.

No longer, not in today’s one-and-done world in which top players rarely stick around long.

“What Coach K has done in my judgment, and I think Calipari has done the same thing, they’ve adapted to the landscape, and they are dealing with it in a positive way,” said Jay Bilas, an ESPN analyst who played on Krzyzewski’s first Final Four team in 1986.

“Now people want to use value judgments to it and say, ‘This is not the way it’s supposed to be’ and ‘This is antithetical to college.’ Well, says who?”

Krzyzewski, the Hall of Famer in his 35th season at Duke and the winningest coach in men’s Division I history with 1,016 wins, didn’t have a player go pro early for nearly two decades.

It took five years for Luol Deng to become the next one, but Duke has now had three in four seasons: No. 1 overall pick Kyrie Irving in 2011, Austin Rivers in 2012 and Jabari Parker last year.

It’s forced the 68-year-old Krzyzewski to adjust his approach compared to the days when Christian Laettner, Bobby Hurley and Grant Hill were four-year guys or even when Jay Williams, Carlos Boozer and Mike Dunleavy stayed for three.

“It actually starts before they get here,” Krzyzewski said. “We try with the kids, especially if they commit early, to develop even a deeper relationship with them than we did 10 years ago. You had time (then). You want to know them even better because you’re only going to have them for a shorter period of time.”

Their arrival comes a year after Parker arrived as an all-but-certain one-year player.

The reality is it isn’t all that different — except maybe for the smaller numbers — than what Kentucky’s Calipari often is criticized for doing with his “succeed and proceed” approach.

As Bilas sums it up, Krzyzewski “has been playing against these players, and if some of them want to come to Duke, why not take them?”

And considering college should help prepare someone for a job, there’s nothing wrong with a player leaving school to start a lucrative career.

“I really get tired of this discussion of basically people — and they’re not just fans, they’re NCAA member administrators — their view is ‘Our one-and-done is a great kid that had a wonderful opportunity he couldn’t turn down, and your one-and-done is a threat to the integrity of this enterprise,’” Bilas said.

To that point, Krzyzewski said the program’s ability to develop players is “obvious” but his pitch includes that the university itself “has a chance to develop you, too.”

Okafor said knowing Krzyzewski had “coached the best of the best” was key in his decision, though he and Winslow said getting to the NBA wasn’t a big part of the recruiting conversations.

“He always knew that the NBA could be a part of my eventual path,” Winslow said. “But all our discussions were about me becoming the best player I could at Duke, not really any conversation about the NBA.”

Bilas was part of the recruiting class that got things rolling for Krzyzewski, Bilas, Stanford head coach Johnny Dawkins, Mark Alarie and David Henderson were the senior core of a 37-win team that lost to Louisville in the 1986 title game.

But in today’s game, Bilas said, Dawkins would’ve probably gone to the NBA in a year or two and Alarie in maybe two years.

The only constant in the radically different equation is Krzyzewski.