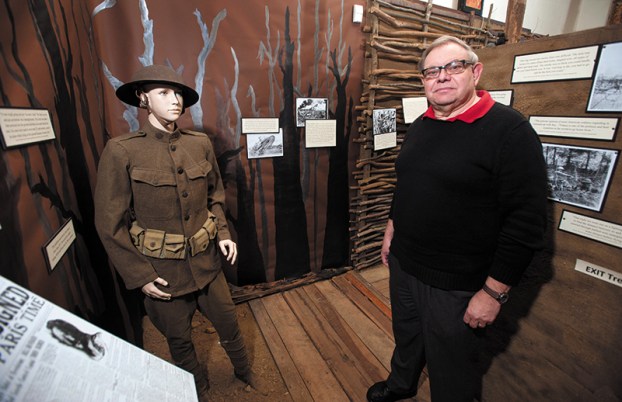 JON C. LAKEY / SALISBURY POST Retired Rowan Salisbury School history teacher continues to bring his excitement for history to the visitors to the Rowan Museum. His talent for bringing history to life has been very beneficial to the musuem by his designs for the exhibits that are built for the museum. His latest project was devoted to the Rowan County soldiers that served in World War I.

SALISBURY — Terry Holt and Rowan Museum Inc. received a prestigious state award this past weekend in Durham for the museum’s current World War I exhibit, “Over There, Over Here: Rowan Remembers World War I.”

The N.C. Museum’s Councils presented Holt with its “Award of Excellence” at the  organization’s annual meeting held at the Washington Duke Inn.

Holt, president of the museum’s board of directors, also was chief builder and designer of the exhibit.

It was the first time Rowan Museum has received this prestigious award. Kaye Brown Hirst, executive director of Rowan Museum Inc., and Holt’s wife, Eunice, also attended the weekend activities, which spilled over into Monday.

Hirst helped in preparing the nomination and members of the NCMC’s Awards Committee called and spoke with Hirst about the exhibit prior to its selection.

Chair of the Awards Committee, Matt Edwards, director of the Mount Airy Museum, made the presentation to Holt. He said among the stack of nominees, many of which were from large museums across the state with large budgets,  “This one rose to the top and the members of the committee knew they had one that must be recognized, especially since they built a wonderful interactive exhibit on a shoestring budget for less than a $1,000.”

Holt was surprised and pleased with the special honor.

Museum professionals and museum volunteers from across the state gathered for workshops, networking, vendor fair, business meeting and awards ceremony.

Salisbury Police charged a Concord man with breaking into the Mahaley Avenue home of his former girlfriend, taking money and... read more