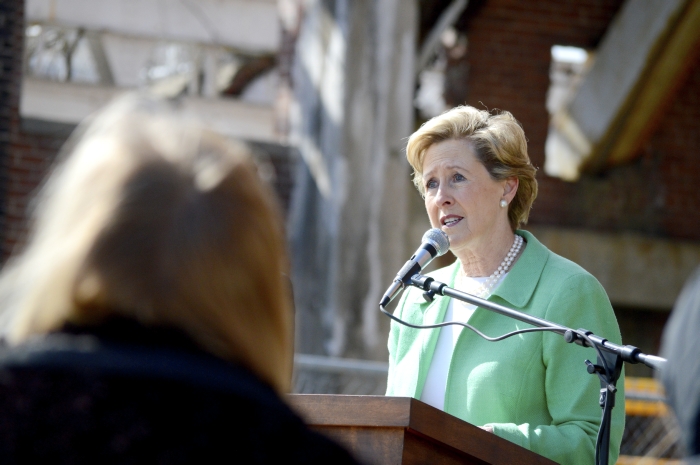 Josh Bergeron / Salisbury Post - Cultural Resources Secretary Susan Kluttz announces the start of a renovation project at the N.C. Transportation Museum in Spencer. The renovation is of an old building that provided power. It will cost more than $2 million.

SPENCER — North Carolina’s Transportation Museum is bringing steam power back to the future.

State officials on Saturday officially announced the start of a $2.2 million renovation to the museum’s former powerhouse building. The announced renovations would be the first phase of construction, said interim Museum Director Kevin Cherry. The first phase would focus only restoring the structural integrity of the powerhouse building, Cherry said. When in operation, the building provided power to Southern Railways’ repair facility for steam-powered trains in Spencer.

The powerhouse building was built in 1896, as one of the original structures at the locomotive repair complex. Employees worked in three, eight-hour shifts to repair trains at the rail yard.

By 1913, power demands were so large that eight coal-fired boilers were added to keep up with demand. The building also expanded in 1924 and 1938. It also provided power to the town of Spencer.

The transition from steam- to diesel-powered trains in the mid-1900s decreased the need for the Spencer repair yard. In turn, less electricity was needed to power repair operations, and the powerhouse closed.

“While it continued to generate power up until 1959, 1960, they were starting to buy more and more from Duke Energy, so it was not generating all the power needed for this facility at the end of the its story,” Cherry said.

Even as Southern Railways’ repair facility transformed into a museum in the 1980s, the powerhouse fell into disrepair. In 2010 a tornado further damaged the building, which already had a caved-in roof.

“It’s such an exciting day for the Transportation Museum, for Rowan County, for Salisbury, Spencer, East Spencer and North Carolina,” said N.C. Cultural Resources Secretary Susan Kluttz. “All of us understand that this is important, so important, not only for our history, but also for economic development and jobs in this state. It’s important for authentic tourism and most of all for the quality of life that we know is so important here in North Carolina.”

Construction on the first phase is scheduled to wrap up by the end of 2015, according to Cherry. The powerhouse structure, he said, won’t be open to the public until all phases of construction are completed.

Instead of a ribbon-cutting or formal groundbreaking at the end of the announcement, Kluttz and Steven Mersch, Transportation Museum foundation president, harkened back to the powerhouse’s operating days to signal the start of construction. The pair flipped an electric switch, resulting in the sound of buzzing electricity from a battery sitting several feet away.

Cherry led attendees around the exterior of the powerhouse after the announcement and described a plan to locate an outdoor events space next to the powerhouse. A picnic area is one idea he mentioned as a possibility for the outdoor space.