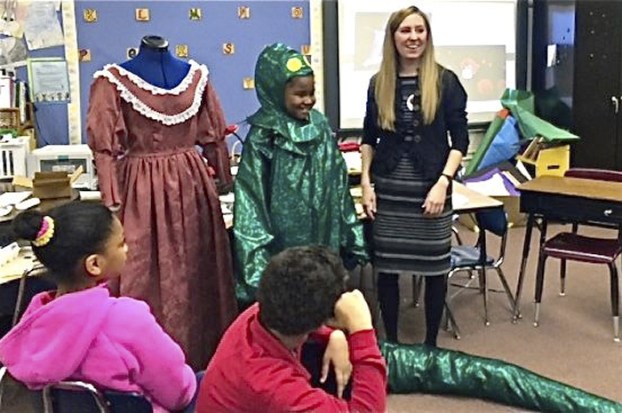 Success for a lifetime: Exploring careers at Overton Elementary School

What do a National Football League player, an internationally known choreographer and a culinary student at Livingstone College have in common?

All of these individuals spoke at Overton Elementary School’s annual career day.

These guest speakers, along with 13 other professionals in the Rowan-Salisbury community, taught more than 300 kindergarten through fifth-grade students about the necessity of hard work, dedication to your craft and resilient optimism in order to achieve their various career aspirations.

Chris Smith, of the Jacksonville Jaguars NFL team, spoke to fourth- and fifth-graders. Smith attended Overton as a child and told the students, “Don’t listen to people who tell you that you can’t do it. You can do it. You can do anything you want.”

Smith stressed the importance of staying dedicated to school work no matter your career aspirations, and encouraged the students to have cooperative, respectful behavior at school.

Tod Kubo, who has worked as a choreographer across the United States as well as in Europe, was in town to work on the show “Cats” for Piedmont Players.

Kubo showed videos of dance routines he had created and told the students, “Dream big!  But be willing to put the work in to put (the dream) in the palm of your hand.”

Kubo also encouraged the students to “pay attention to what really moves you,” and not be concerned with other students or people who might be bullies.

He stressed to the students that the opinions of others are not nearly as important as doing what you love.

Not only did culinary student Elecia Davis speak to Overton students about her passion for cooking, but she also brought in fruit, yogurt and brownies she made. Davis talked about the importance of staying dedicated to your craft even when the hours are long and the work is difficult.