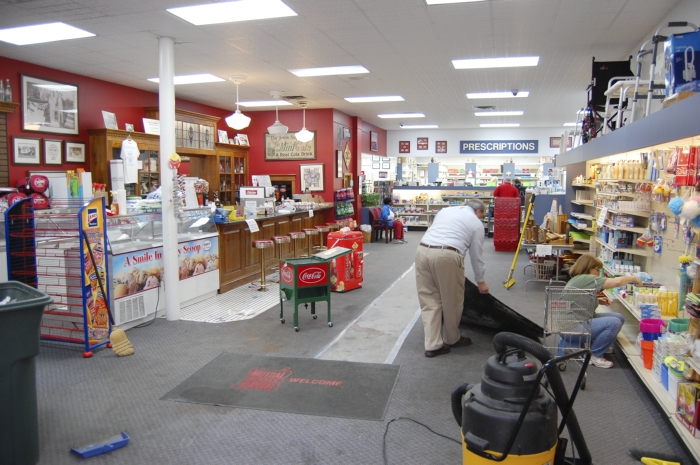 Employees at the Innes Street Drug store were cleaning up Wednesday after a car crashed into the store Tuesday afternoon.

A cleanup is underway at a downtown business after a car crashed through the store’s entrance.

Innes Street Drug Store on South Main Street is open, though it is only filling prescriptions right now. On Tuesday, a Cadillac SUV smashed through the entrance of the building, sending one person to the hospital.

Julie Fuller, who owns the store along with her husband and brother in-law, said she’s thankful nobody was seriously hurt in the accident. She said a family member of  Terry Cuthbertson, who was pinned under the car, stopped by the store and said Cuthbertson has two broken ribs as a result of the accident.

Fuller said she didn’t know how long it would be before the store is back to doing normal business. It will depend on how long the insurance process takes, she said.

But she said the community has been very supportive so far. People have been coming by to offer words of encouragement, she said. Workers from Central Piedmont Builders, currently working on the Bernhardt Building a block away, installed a temporary entrance on the store — plywood and a doorway.

Inside, the store looks relatively intact, though the carpet will need to be replaced, Fuller said. The shelves in the center of the store were destroyed in the accident.

Sandra Young, an employee, was standing behind the cash register near the entrance of the store when the accident happened. She said glass went everywhere, but that she was uninjured.  She said there was Cheerwine all over the carpet after the accident.

Fuller said they will do what they can until things get back to normal.