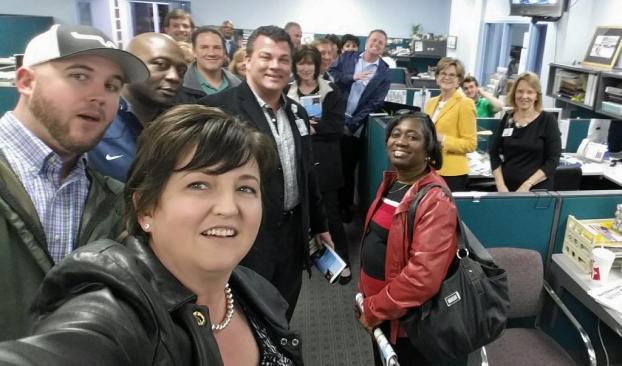 Janet Springs takes a selfie of the Leadership Rowan class in the Salisbury Post newsroom.

The Leadership Rowan class organized by the Chamber of Commerce stopped by the Post Thursday. They were devoting the day to exploring communications — a good idea for people who hope to become community leaders.

David Whisenant from WBTV and I fielded questions about everything from accuracy to the Internet. Though there was a lot of good-natured joking going on, it was clear the class members had serious concerns about the community and how people stay informed.

The question that stumped both David and me concerned people who don’t care about the news. What would it take, one woman asked, to get people to plug in to what’s going on in the community and world — and to care about it? She was particularly concerned about young people.

Good question. My experience has been that it takes a crisis to bring some people to the news. On a national scale, that would be the Sept. 11, 2001 terrorist attacks. Locally, it might be the possible redistricting of  your neighborhood to a different school or a request to rezone the property next door.

How do you get people to become engaged during normal times? That’s what journalists in all media have been asking themselves for decades.

I wish the entire Leadership Rowan class could have been at the Catawba’s College Community Forum last Tuesday to hear a demographer talk about the changes taking place in Rowan County’s population. A professor quipped afterwards that he wished city council and county commission had been there, too.

Though Rowan County’s population has not grown much — and in fact may have shrunk slightly in the past five years — the 138,000-plus people here have changed. Looking at migration trends in Rowan from 2000 to 2010, demographers found that as young people moved out to go to college, the military or other jobs — young white people, largely — people of other ethnicities were moving in.

What will increasing diversity mean for the future of Rowan County?

What local leaders need to worry about more, though, is how to keep from losing population, regardless of ethnicity. Cities like Charlotte and Raleigh are sucking up all the growth; they’re the happening places to be. They have jobs, nightlife, excitement.

Rowan and other counties that are not adjacent to a booming metropolis need to figure out not only how to attract people, but also how to keep the residents we have — including their children.

No matter how much you think you know about Rowan County — past, present and future — you’d be amazed what you can learn by participating in Leadership Rowan.

It’s a time commitment, spending one Thursday a month exploring some facet of the county. But you gain a lot of knowledge in a relatively short amount of time, not to mention new friends and acquaintances.

If you wait until you “have time,” a lot of opportunities will pass you by. Besides, our community needs your well-informed leadership. The future has arrived.

Why ‘Race Together’? Why not?

A lot of eyebrows shot up last week when Starbucks announced that baristas at 12,000 Starbucks locations in the United States were... read more